Three minutes before the 17 hour cut off 78-year-old Harriett Anderson crossed the finish line as the oldest official finisher, the winner of her age group and the last official 2013 Ironman Kona finisher. In fact, Harriett beat her time from last year by 2 minutes, even with a fall during the bike portion of the race!! 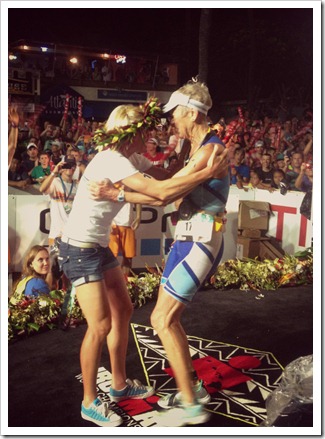 Having completed over 20 Ironman races, Harriett has automatically earned re-entry to Kona the last few years by winning her age group. A feat that she managed with only seconds to spare on the clock in 2012. This year she was the only woman in her age group, 75-79! Harriett took the stage alone at the awards banquet and stated that assuming she feels good after the winter she will be back again next year. Certainly Harriet’s dedication to a sport that requires endurance physically and mentally makes you rethink any limitations based on age.

THE FIRST UNOFFICAL FINISHER
Three minutes later the clock passed 17 hours and those remaining on the course knew their day was over…even for Karen Aydelott who crossed the line with the help of announcer Mike Reilly at 17:00:45. That’s right 45 seconds stood between her and the famous words “You are an Ironman”. 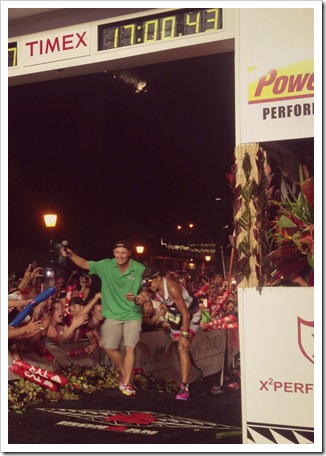 Karen completed her first Ironman Kona in 1989, finishing with hypothermia in a time of 13:30. Completely undeterred she kept racing and improving…then came June 2006.

On a training ride with friends she was hit from behind by a car.

Two years and dozens of surgeries later they amputated her leg.

Karen believes this was the only way she was going to have a chance at an active life again. A year after that surgery, she finished a 70.3, continuing her journey after a couple DNF’s at the full 140.6 distance.

Karen registered for Kona again in 2012 as part of the able-bodied age group women 65-69. She hadn’t be able to get via the lottery for challenged athletes, so she set out to qualify by winning her age group at Ironman Arizona in 2012. Her task was made easier by the limited number of women entering the 65-69 age group…but easy is a lot like saying when the training plan says “easy run” and you feel like you want to crawl in a hole because everything hurts.

These are just two of the many stories from Kona and I hope that more will be shared in the Nov 17th airing of the event! Until then here is a little montage of speakers, finishers and moments from the week that I compiled.

Any other stories from this year you’ve heard that have resonated?
What does it mean to you when reading these stories?

Oct 18
I am grateful for reminders that what I do matters. It’s not brain surgery, but it’s what I love and what I believe in and that’s enough.

The Story of an Original Ironman
Next Post:No NYC race countdown here