Home » Kona » The Story of an Original Ironman

The Story of an Original Ironman

It’s a story as old as time…one man dares another in a bar and the next thing you know it’s a world wide event. Well something like than anyhow.

Prior to this week, I admit my knowledge of the Ironman was limited to the replays I have watched over the last few years and the friends I’ve had compete. Largely leaving me with a feeling of amazement, maybe even overwhelmed…how could someone take on 140.6 miles?!

This weekend I was lucky enough to speak with Dave Orlowski the 3rd place finisher of the original 12 Ironman finishers {15 started and registered for $5} about how it all began and his journey to complete 140.6 miles in CUT OFF JEAN SHORTS.

I feel chaffed just thinking about that possibility!

How Ironman Was Created

For those of you like me who may not know the story, here it is from an original.

3 men in a bar {no seriously!!} in 1978 were debating the merits of which sport was harder,running, biking or swimming. The result after some debate was to simply create a challenge that involved doing all 3.

Dave happened to be sitting nearby and as a young marine felt he could surely do this as well. Note that it wasn’t even a race, just a group of men ready to challenge themselves…yes definitely the kind of thing you think of in a bar.

7 weeks later with a borrowed bike and just a few runs under his belt the journey began.

No one knew about “bricks”, how to train for endurance, how to fuel with yet to be created gels and they didn’t really have time to think about it anyhow. Dave decided to wear his cut off jeans so that he could bring money with him to stop for water and food during the bike ride. One of his pit stops included a meal at McDonald’s….I’m not sure what’s worse the pain of those shorts or the later stomach ache. 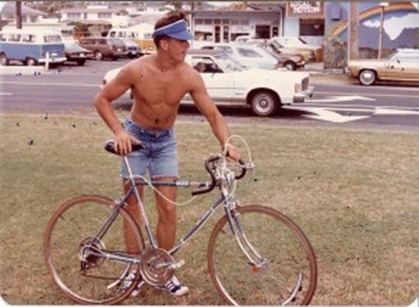 As you can imagine Dave was in pain…a lot of pain.

He was chaffed from the bike ride and finding that his legs simply didn’t want to cooperate for the run. But one thing he learned in the service was “don’t start something if you aren’t willing to finish”, so he soldiered on when something crazy happened…watch the video to hear about his run and yes it’s a tear jerker!!

30 years later Dave found himself with a weight issue and some unfortunate health problems. He was invited back for the 30th anniversary of the race in 2008 and it reignited in him a desire to be fit and feel his best.

After that the training started fresh, he wasn’t a young army man any longer he was out of shape. But his determination returned and he did it, he finished another Ironman…and another…and he was back in Kona this year ready to go; making this his 29th in just 5 years!

Pictured here is the original Ironman 3rd place award they randomly created after finishing what they realized was a much harder and more grueling task than they imagined in that bar.

Back with Team Timex for another year, Dave helped raise over $4,000 for the Ironman Foundation {charity} and without a doubt inspired many more people to start thinking about this sport.

We saw him in the water at the start, he made it through the bike and then unfortunately had to head to medical at mile 9 of the run because his body was simply not cooperating. Dave suffered digestive issues throughout the day making it impossible to keep down food, known as FUEL in these circumstances. For a man who doesn’t quit, this was a hard decision and probably one that was made for him, but his story is about so much more than this finish line.

It’s about finding the will to push through that original race when hardly anyone would have known if he stopped! It’s about overcoming illness and becoming an athlete again 30 years later. It’s about raising money for charity, it’s about honoring friends and well…you get it. Ironman is about more than the sport.

After being so inspired by the athletes in 2013, I was truly lucky to go back in 2016 for a whole new experience!

What’s the hardest even you’ve ever done?