Hip extension involves some of the strongest muscles in your body, the hip extensors. But more often than not, they’re also the most overlooked.

I’m the first to admit that because I started running as supple 20 year old, I didn’t spend much time thinking about anything related to hip mobility or injury prevention.

OHHHHH silly little me. If only I’d known that improving my hip extension, flexibility and mobility would have not only improved my running, but prevented IT Band Syndrome.

Ahh well let’s just say I’d have been doing all of this sooner!

In this article, you’ll learn everything you need to know about hip extension, what muscles they target, why they matter for runners, and the exercises you need to do to avoid injuries.

What is Hip Extension?

Hip extension is the movement of your thighs away from your front pelvis. It occurs when you extend your hip joint so that the angle between your thigh and pelvis increases.

In other words, when your foot is on the ground and your opposite knee is in the air, your extension is in the foot pushing off.

Our hip extension is often compromised due to our sedentary lifestyle, as sitting around for too long can result in tighter hip flexors and weakness in the hip extensors.

As explained above, hip extension is when you extend your hip joint so that the angle between your thigh and pelvis increases. Examples of everyday activities that involve your hip extensors include standing, getting up from a chair, climbing stairs, walking, and running.

Hip flexion, on the other hand, is when you decrease the angle between your thigh and pelvis. Examples of activities that involve your hip flexors include sitting at your desk and lowering into a squat.

What Muscles Do Hip Extensions Target?

Hip extension relies on two main muscles which are our glutes (gluteus maximus) and hamstrings. Giving you a little more of the body breakdown so you know where your muscles are and how they work.

There are three muscles that make up the hamstring, namely the biceps femoris long head, semitendinosus, and the semimembranosus. All three support the glutes during hip extension movements.

AND on the flip side, we’ll be working on releasing tight hip flexors!

Why Does Hip Extension Matter for Runners?

During the push of portion of our stride, the leg should be extended straight behind us and our glute medius engaged to create a forceful push off the ground.

However, if our hips are weak, unstable, or inactive then we lose out on this power!

One of the most basics ones is that it’ll become more difficult for you to increase stride length sufficiently enough to be run at a pace that recognizes your full running potential, while still staying efficient.

Jay Dicharry of REP Biomechanics lab says 85 percent of runners have tight hip flexors. And Olympic running coach Bobby McGee says it is the first thing we should address with running form.

Without that rotation the body begins to compensate with other muscles. This leads to overuse injuries, imbalances, IT Band and knee issues.

One of the most common ways this is illustrated is by looking at if your “hip drops” when running.

This is a sign of weak hips and often a weak core. Get a complete stride analysis, not just your feet at the running store, to see where you might be weak. 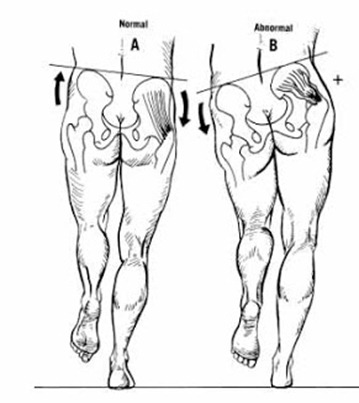 There is a real correlation between runners being unable to achieve the required glute-powered hip drive while running due to tight glutes and hips.

Firstly, when a runner can’t propel with their hips, i.e. glutes and hamstrings, they tend to propel using their plantar flexors (the calf complex) at their ankles.

This can manifest as pushing-off excessively at the ankle which places more demand on the plantar flexors of the ankle and calf complex.

While these flexors are structured to contribute to this propulsion through the feet and ankles, they’re not meant to create all of this propelling force. It needs to be shared by the hips and plantar flexors.

By having weak and restricted hips, your plantar flexors have to pick up the slack when it comes to propulsive efforts.

This can lead to a host of issues and injuries such as Achilles tendon injuries, calf tightness, plantar fasciitis, and even shin splints. Not to forget IT band and overall knee issues in general.

Your lower back can also start compensating for a decreased range of motion and strength in your hip muscles which may then even cause spinal injuries.

Unfortunately, runners believe that being injured is just part of the game, but it doesn’t have to be if we listen to our bodies and take just a few minutes to work on some specific areas {{cough hips}}.

Recently I posted on Instagram new moves I’ve been doing with a stability ball that have been amazing for helping to open up my hips {which means a better stride and more fluid movement}.

A number of you asked to see what they looked like in action and who am I to say no!

Standing on your right leg, bend your left leg as though pulling it back for a stretch and place your foot on the ball.

You want to start with the ball almost right below you and then slowly extend that leg back. Initially you might need to lightly hold something to keep your balance. As you strengthen your hips and improve balance and stability, it won’t be necessary.

In a tabletop position with your knees on the ball, rotate both knees to the left and then pull yourself back to the starting position.

You’ll need to engage your core and hips to make this move work!

From a plank position with feet on the ball, engage your core and hips to pull the ball in to your arms and then with control release it back out to a full plank.

This exercise engages your deep core muscles to make them stronger and help increase balance and stability in your body.

Laying on the floor with both heels on the ball, bring the stability ball in to your bum while keeping your hips lifted.

It also activates and engages the postural muscles and abdominals, and it helps to improve pelvic stability. Plus, this exercise is low-impact and so it doesn’t put pressure on joints.

Checkout some other hip bridge alternatives!

This exercise isolates and strengthens your hip extensors, i.e., your glutes and hamstrings.

The exercises, I explained above, might seem simple, but they’re highly effective. They’ll help strengthen your hip extensor muscles and also increase your range of motion.

Using a stability ball, to do these exercises as I’ve explained and shown in the video, creates an unstable surface and challenges more and deeper muscles to kick in and help. This creates strength and these exercises are highly effective at working out all your hip muscles.

Doing these moves will stabilize the pelvis, reduce strain on the back and even help improve your overall athletic performance in not just running but other sports that require power.

Both hip extension and hip flexion are crucial when it comes to balance. While many of us do tend to work our hip flexors, we ignore our hip extensors. By concentrating on both and not neglecting either, we can greatly prevent running injuries from occurring.