How to Truly Resolve Runners Knee by Fixing Knee Drift

If it sounds to good to be true, we’re supposed to believe it’s total hogwash. Plus, I’m a skeptic in general of big claims…but when it comes to runner’s knee, I’m absolutely not yanking your chain this works.

I’ve found a process to help most us of figure out the root cause of why our knees hurt after running and fix it.

Of course, there are a million ways to get injured, but if you feel like you’re stuck without answers I hope these moves and my story help you find some relief!

Unfortunately, it’s a common issue which leads people to believe that running is bad for your knees.

Tons of Dr’s and studies agree that it’s not and in fact it can be helpful in providing joint strength and lubrication.

So what gives? Well….our desire to spend all our time running and not always looking at the other ways we need to strengthen our body for total health.

This is a long post so I can share both my story and the steps to resolve it. If you’ve ever had knee or IT Band problems, I want to make sure I give you all the details.

I know how frustrating it is to try and resolve, so you like me have probably spent wayyyy too many hours testing different things to figure out how to heal runners knee.

We are all different, listen to your body, test, try, repeat.

How to Fix Runners Knee: My Story

Let’s get the backstory, then I’ll share the exact moves I’ve been using which LEGIT had me running again within a couple days… after months of frustration.

July of 2014, my knee swelled up like a basketball {ok maybe a grapefruit} right as I was heading to Ireland for the Race to Kinvara.

It was a once in a lifetime event, so of course I ran anyways and to my great fortune didn’t appear to do any major damage {plus hey I was the only injury so they had to capture the moment}.

Unfortunately after July, I continued to battle knee tightness and pain. It felt like I was doing all the right things and yet making no progress.

Here’s a timeline for you so you can see the progression…as in none and then massive change!

Everyone kept telling me I just needed to rest my knee.
I knew intrinsically that something else was going on, I just couldn’t for the life of me figure out what the heck it was!!!

So I kept digging and finally, put it all together.

I followed the tips I outline below and was running pain free again within just a couple of days!

So yes, I totally believe in these tools.

Let’s break this down in to the key components.

Runner’s knee recovery time can be extensive as you saw with my story above, but that’s usually because we aren’t putting all the components together.

What to do to fix runner’s knee?

So if you really want to know how to cure runner’s knee, keep reading and then TAKE ACTION.

Hip alignment refers to the idea that your pelvis should be level from side to side and not rotated forward or backwards.

Due to the constant pounding of running, it is not uncommon for runners to find their hips get out of whack….what resolves that is first the chiropractor and then allllll the hip, glute and core work I’m going to mention below.

Here’s a test you can do to check hip alignment at home.

My right leg is shorter and I’ve heard this from many chiro’s, so we agreed that was probably not an issue since I’ve been running just fine with it for many, many years.

This move from Kelly Starrett worked the first time I tried it. (It may not be necessary for YOU, so test it out and see if you notice a change.)

All these doctors and not a darn one of them recommended or even looked at this, which makes me crazy!!!

For months I kept telling David it seemed really bizarre to me that I could move my right leg in to hyper-extension, but had 0 extension with my left leg.

I didn’t know what to call it or why it mattered since when I pointed it out the PT they all just said, hmm that’s weird.

The acupuncture guy said tight IT Band, but even I knew that didn’t make sense. So I texted the best doctor on Earth Dr Lorenzo and he said the popliteus muscle needed to be stretched.

Here’s another video with moves and an explanation of the muscle.

Which lead me to “terminal knee extension” and immediately I knew I was heading in the right direction because it finally described what I felt.

I recognize that this issue is probably not one most of you have, but in case someone else out there is banging their head against a wall I had to share it.

I have been doing this and a couple others for the last 2 weeks and have regained almost complete range of motion…that’s right 5 months of no answers and it 2 weeks almost back to normal just doing something for free at home!

After talking with my new stellar sports physical therapist, we agreed that my hips are pretty much always a little off even after adjustment.

Then he looked down at my foot and said, “look how your foot is falling inward while you simply stand still”.

Below is an image of me running to help you understand what falling in means (i.e. pronation).

What’s called knee valgus, is particularly common in female runners, due to what’s known as the Q-angle from wider hips. The result is more common issues with runner’s knee, IT Band pain and ankles, if we don’t do the right strength work.

The knee drift could be caused by foot pronation, weak hips or misaligned hips. 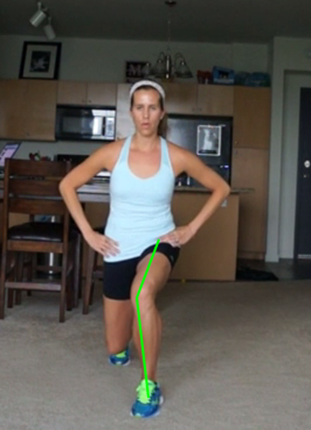 When I switched to the Kinvara’s around 2009 they seemed to resolve my IT Band pain, so I stuck with them for many years.

But it’s highly logical that after many more years of running some things have changed in my body and my stride. YES, you may need a different shoe now than you used to!!

Core doesn’t just mean abs, it means glutes and hips too. All together they provide the stability you need to prevent knee, ankle, hip and IT Band pain from running.

You don’t have to go to a PT, as I do share tons of moves here on RTTF…but it’s never bad to get someone to evaluate your movement patterns.

Once I realized that I needed to first do the knee extension stretch, next was learning to reactivate the glute medius and external rotators.

Squats and lunges are going to work the glute maximus, but you need to activate other muscles for complete hip stability.

Ready for IMMEDIATE HELP? Checkout my 30 Day Core Runner Program, which is 10 minutes a day of follow along videos to help your runner’s knee and IT Band.

Here are some additional movements, you can start doing right now to help fix your running knee pain.

I can also tell you since having knee surgery (due to a trampoline), my PT said repeatedly that my focus on core strength is what helped me to recover and get back to higher mileage faster than normal.

While strength issues are often the primary driver of knee pain while running, there are some stride issues that could be culprits as well.

If you are experiencing sharp shooting pains, then 100% you MUST stop running.

But just not running isn’t going to resolve runner’s knee.

One idea is Manual Muscle Manipulation. Tight muscles pull your body out of alignment and your knees often taken the brunt of that!

Beyond just seeing a PT to figure out your alignment, they can also work more deeply with your muscles.

This could mean A.R.T., a deep tissue massage, dry needling, or even electric stem; you have to experiment to find out what works best for you.

I found that daily foam rolling, combined with a monthly sports massage is  one of the best ways to prevent running knee pain.

I hope this was helpful to anyone having issues, I know how frustrating it can be to try and find answers!

Please do share with your running friends, I want us all to figure out what works for us individually to stay running as long and healthy as we can.

Moral of the story, you know your body…keep looking for answers.

Have you ever realized your favorite shoe might not be best for you anymore?

How often do you work those hips??