Home » Recipe » sports nutrition » Is the Scale Broken? What Happens when the Numbers Don’t Budge.

Is the Scale Broken? What Happens when the Numbers Don’t Budge.

**Update on 2014 post with some additional information and my own personal update.**

%$&*#(*@@@ <<< In keeping this a clean blog, I’m not sharing the particular words that floated from my mouth after stepping on the scale, but it wasn’t “aww shucks”. Certainly my current body fat goal is as Jillian Michaels says “vanity” over health, but hey I’m owning that.

When I started my journey with Kristina LaRue at Diet Diva I had a couple of specific goals:

While I haven’t paid much attention to the scale in years, a recent body fat test made me realize it could still be a good indicator of progress with my new eating habits and training. Hence the frustration at not seeing the scale move. BUT let’s back up…

I wanted a good baseline for where we started so I took measurements with a tape measure for key areas (waist, hips, chest, thigh, arm) and got tested in the Bod Pod. You can use any of the body fat measuring options out there you want, just find one you can do consistently as I have found that I get different results from each option.

Read more on body fat testing to understand it all >>

Don’t know what the Bod Pod is??

This space age looking machine is marketed as “one of the easiest and most effective ways of truly measuring body fat”. Hydrostatic weighing still tends to be the gold standard, but it’s harder to find a location and requires more time, and personally I had  a much better experience with Muscle Sound measuring.

In the Bod Pod you are wearing a swimsuit and swim cap while the machine measures air displacement. The number tends to be a little bit higher than using calipers to measure just a few sites because this is calculating all the way in and around your organs, etc.

Admittedly, I was shocked (not in a good way) at the results which were indeed higher than my at home scale and a hand held body fat analyzer. BUT at least I now had a starting point from which to measure progress and determine what worked and didn’t. 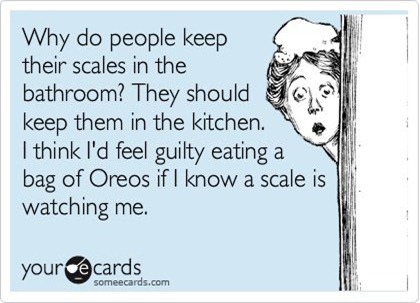 Beyond Calories in Calories Out

After coming back from Ultra running camp, I just knew all that healthy food, no dairy, no gluten and hours of movement I would certainly see the scale move…nope.

Which was a reminder once again that the old logic thrown around stating that it’s all calories in – calories out just isn’t 100% true. A million other factors come in to play like food sensitivities, hormone imbalances, stress, sleep, food quality and temperature.

The caloric equation assumes that calories can only follow two pathways once they enter the body: exercise or storage. The concept of excretion (through heat or waste) is largely ignored.

If you’ve ever had that moment of “why isn’t all my hard work showing up”, here’s a few things to keep you from losing your sanity and strategies to keep moving forward.

The scale is not the only measure of effort (nope I didn’t say progress).

This was the first realization I had to make. Just because the scale hadn’t budged didn’t mean I hadn’t truly been following the plan and being patient with myself about making changes to eliminate my food sensitivities and time my protein intake.

Taking a moment to look at how great my stomach has felt or how proud I was for cutting back on sweets made me realize that my efforts were not in vain at all.

Here’s a standard accepted body fat chart — you’ll notice there is NO correlation between weight and body fat.

Again I think this is a great reminder that you might not be losing weight because you don’t need to, you need to build muscle.

As a runner I know this lesson all too well…often right at the peak of training everything hurts, feels hard and I’m mentally ready to throw in the towel. Then my body starts to absorb all the training, race day rolls around and the work comes together.

Harsh? No, true. Both training and life stress increase cortisol, which does in fact cause your body to retain more fat around the mid-section. Additionally when you’re unhappy it’s often harder to workout, easier to justify a pint of ice cream and simply move less in general.

Checkout Lifting Revolution’s why negative self talk is ruining your weight loss efforts.

Total restriction is probably making you fat too.

A 2008 study showed that low-calorie diets have a horribly low adherence rate, supporting what you probably already logically knew: you can’t sustain being hungry all the time and it usually leads you to overeat later because “you deserve it”.

You can initially lose 5 to 10 percent of your weight on any number of diets, but then the weight comes back. We found that the majority of people regained all the weight, plus more. Sustained weight loss was found only in a small minority of participants, while complete weight regain was found in the majority.  — Study

Weight lifting will change your body, maybe it will or won’t change the scale.

Often we excuse lack of scale progress with the statement “I must be gaining muscle” followed by the horrific statement “muscle weighs more than fat.”

ABSOLUTELY your body might be changing due to increased muscle, especially as a runner now taking in more protein and finally spending time in the weight room, but be honest as to if that’s truly the case. For the other statement: muscle and fat weigh the same. Stop saying it. 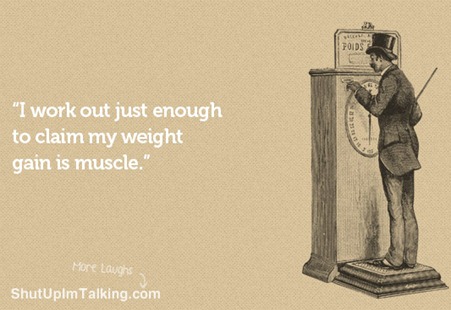 Shortly after having that harsh conversation with my scale, I got some results back from the doctor which probably explain part of the problem. I’m a totally unbalanced individual or at least my hormones are. More on this new update later this week.

This post was written some time ago, so I wanted to share some updates to remind us all that body goals are not:
A. An overnight process
B. The same for everyone

The number on the scale for  me remains nearly unchanged though I was running far less all year due to knee surgery. I actually increased my totally calories during that time too thanks to finding a coach who created a custom weight lifting and nutrition plan for me…I tried a one size fits all prior to that and felt defeated that my results weren’t as amazing as the other 90 day success stories.

My recovery is great now! I bounced back from knee surgery.
My digestion is feeling so much better after eliminating some foods and figuring out what works for me.
Sugar cravings….eh not as great largely because we have been intentional increasing my carbs to boost metabolism.

How do you measure progress?

Do you have “vanity” body goals or only performance?

How to Buy Running Shoes (Online or In-store)
Next Post: Dear New Runner, You Can’t Imagine What’s Ahead