“Would you like to attend a running camp in Jackson Hole lead by Eric Orton, coach from Born to Run?”

My initial thought was what a dumb question. OF COURSE I wanted to go.

I did what I always do when running is the question: said yes and then explored the details. 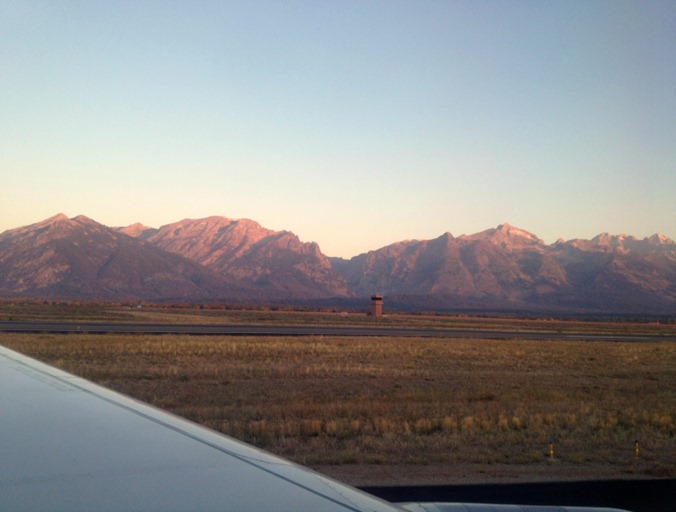 By the time the wheels touched down in Jackson Hole, this situation finally registered in my “sane mind” and I knew it was going to be a beautiful, but grueling few days.

The hard truth is I was not prepared: 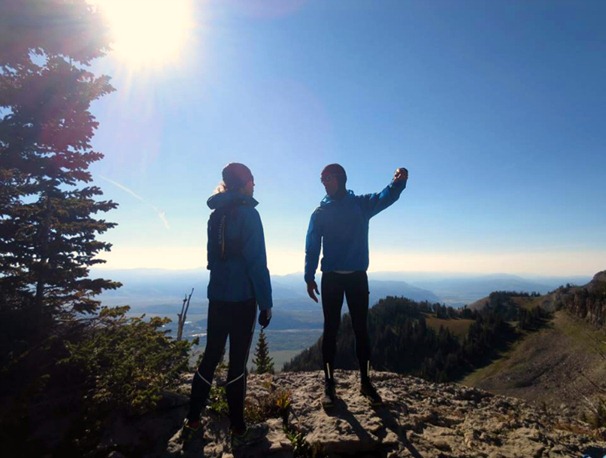 I call this the “yes you can” photo, where once again Eric is giving me just enough details to handle what’s at hand and not think about what’s to come after that.

The man, the myth, the legend from Born to Run is exactly what every crazy runner needs in this kind of situation. He’s a true coach not because of one book, but from a lifetime of experiences.

I want to share with you details about the days, but if you don’t get that this was more than a workout in the mountains, you’ll be missing the whole point.

It was a mentally and physically jam packed three days that should have come with a warning label “will change your life, be prepared.” Sounds like a lot to ask of a running camp right? But that’s the point…this is more than a running camp!

RISE TO THE OCCASION
Thursday morning our small crew of 5, plus coach Eric met for breakfast at the Teton Lodge where immediately I liked Allison who was also a dairy free, gluten free eater and thus made my life super easy the rest of the week!

As the group started chatting about different running experiences, I just kept thinking yup this is going to kill me, but at least I’ll die happy.

Our very first order of business was to unlearn a lot of bad form habits through doing about 90 minutes of drills inside with our bare feet and some great tools that Eric has developed. I’ll be sharing more on this whole area later because it deserves it’s own post! 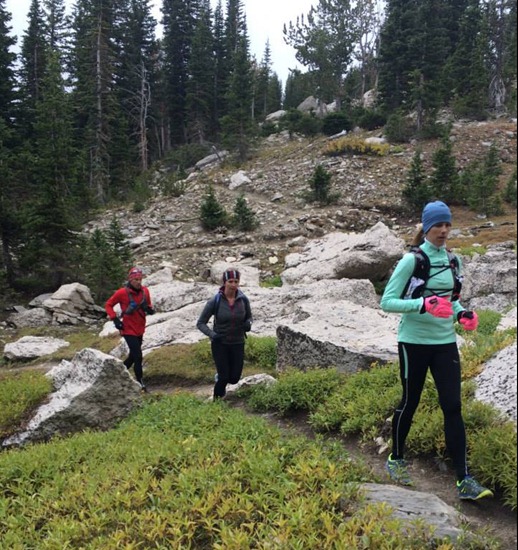 After all the work inside, the rest of the camp was truly about focusing on putting those new movement patterns in to action and using them to be stronger, faster and injury free. 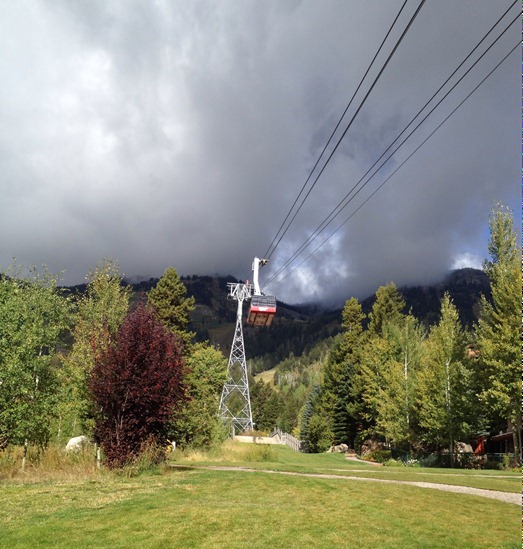 That first morning we took the tram up to 10,000 feet where it was cloudy, windy and lightly snowing. Embracing the experience I couldn’t stop smiling even though I was freaking out on the inside…it was just too stunning not to be in love, but I’m not used to being on top of a mountain. 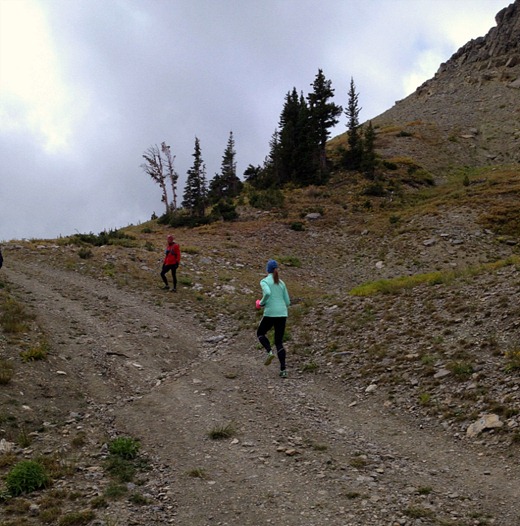 The next three days we spent time doing a whole lot of hill repeats on various 20% grade hills first at 10,000 feet and then working our way up the mountain from 6,300 feet. The goal of all of these was:

Other times we were simply hiking up {always up I swear!}, jogging the flats and in my case tip toeing the down hills. Hey, I didn’t lie about my lack of trail experience and with the steep grades and loose rocks I just wasn’t as sure footed as the great folks in my group who are trail runners. 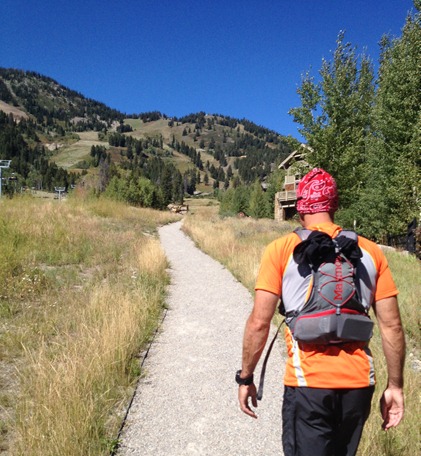 HITTING A MENTAL WALL
I’m not proud of this.

I hate to even mention it…but I think it’s important.

On day 2 I found myself verging on tears about every 5 minutes of the 3 hour morning workout. In fact, when Eric asked us to think about our next big goal during one run segment I blurted out “not to cry to today!” YIKES, after that I just tried to shut my trap.

On a normal day everything and anything running makes me happy. 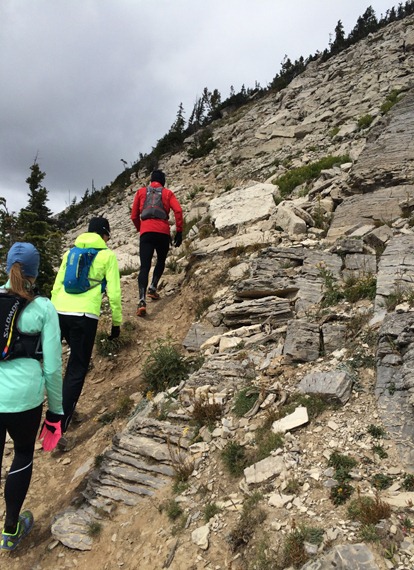 For some reason as we started up that mountain {during that workout we climbed about 2,000 feet over 3 miles} I was like Linus with a crappy black cloud following my every move.

Maybe it was lack of sleep, lack of oxygen or simply being pushed outside my comfort zone, but I just couldn’t latch on to the fun or beauty around me.

Unfortunately as we started to descend that same 2,000 feet my knee began to hurt once again. 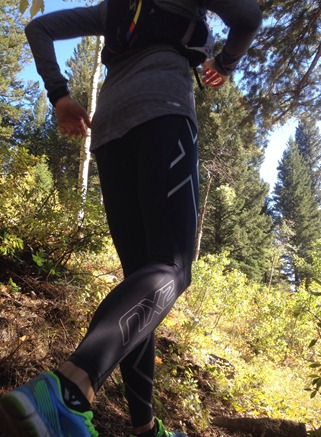 That afternoon, Eric did some pressure point work and really helped to figure out the cause of my runner’s knee {which as we know isn’t usually the knee itself}. At this point, I literally started to cry because well he was doing what a good sports massage can do and breaking up some serious scar tissue…

Yet that was the moment when my attitude started to shift too.

“Every challenge offers us an opportunity to improve and get better, but it takes a mind shift sometimes. Things will not always go the way we want them to and the more we resist this, the harder it will get. Resistance creates stress and a desire to change something external only leads to more stress. Acceptance of the situation gives way to learning and ultimately leads to great satisfaction and feeling of accomplishment.”

I didn’t have to do the afternoon hike, it was entirely a choice, but I might be missing out on some great time with the group, a cool experience and of course taking full advantage of the time in Jackson Hole.

For me the clouds quite literally parted in that moment {no seriously this photo is totally from camp!} 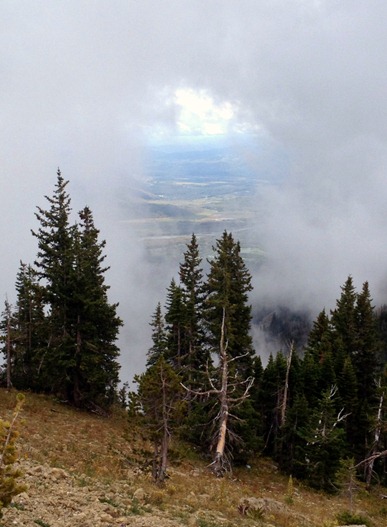 I like being in charge of what I do and I definitely like fully embracing opportunities. So I hiked that afternoon and the next morning though my knee hurt, I did the group run and then…well then came the scariest part of all…

FACING THE FINAL FEAR
After finishing our final morning run on Saturday, it was time to peak out.

Say what, what?? Peak out means literally hiking to the peak of the mountains in the area.

HOLY SCHNIKES. (The one to the far left is where we were headed). 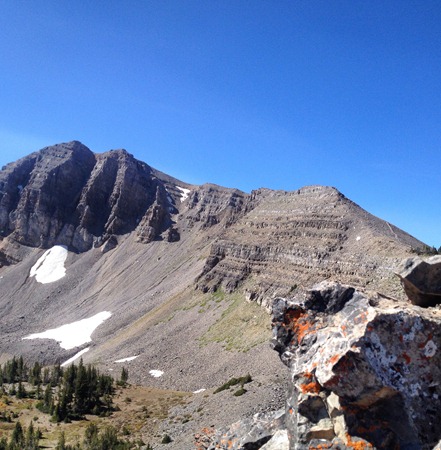 As I’ve mentioned, this camp was about so much more than learning to mountain run. It was truly living and breathing what Eric writes about in The Cool Impossible: You can, if you are just willing to believe.

As we started picking our way along the rocky path, we met our first obstacle…LITERALLY CLIMBING UP a rock face. In that moment, I wanted to look at him and say “it’s been real catch ya’ll later”.

Instead, I took a deep breath and just did exactly what he told me to. 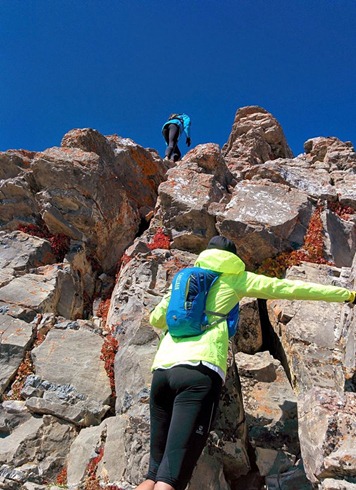 From there we had about an hour of hiking along the side of a freaking mountain to reach the peak. In a bizarre twist I was actually the one leading the group. I kept my head down focused on not moving with a rock all the way down the edge and as the adrenaline peaked…so did we. 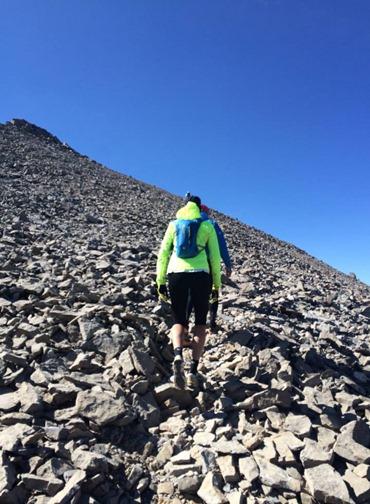 Once we reached the peak, I was reassured by the fact that no one wanted to move very much! Turns out I wasn’t the only one facing some fears. Even these adventurers had to dig deep to walk across some of the narrow ridges and loose rocks at 10,700 feet.

Most amusing to me was that after an hour of nerves raging like a teenagers hormones…we had to get back down!! The fear facing wasn’t over yet, since I’m actually far more scared of down than up! 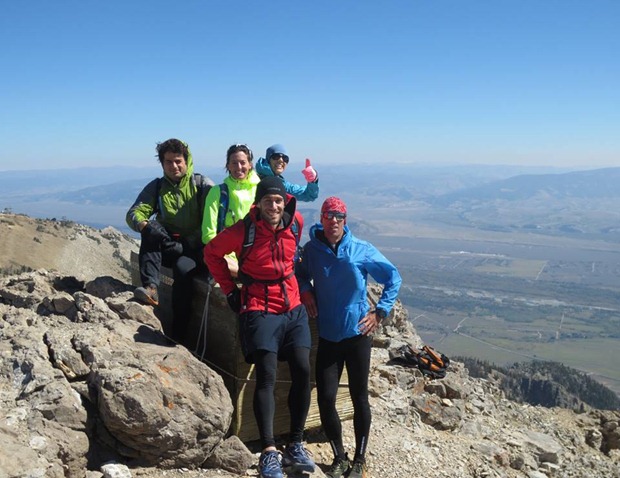 Hard as this 3 day camp was for this flatlander, I am already thinking maybe next year I could try again and do better! Plus there is just so much more that happened which I haven’t even told you about like the evening meals which were just an amazing time to talk about all things running and of course meeting other runners who have inspired me to look at running in a whole new way.

I faced multiple fears last week and guess what…I didn’t die or fail. One of Eric’s favorite lessons: “What if failure doesn’t really exist?” A pretty valuable lesson for every aspect of running and life! I hope I can continue to take it with me to reach some new goals.

Look for follow ups on what I learned about running form and running ultras!

Too many great things to slap in just one post! For now let me just say you first need to read The Cool Impossible and second need to totally consider this camp.

What fear have you conquered lately?

Have you ever gone running at altitude in the mountains?