Home » Funny Running » Are You a Fitness Snob? Fitness Obsessed? Or Just Right?

Are You a Fitness Snob? Fitness Obsessed? Or Just Right?

Years ago, an article in Women’s Health magazine caught my attention and has stuck with me because well it labeled me as a fitness snob!

I understand the idea they were going for, but felt that much of what they were calling “snob” was more accurately people who enjoy being fit. People who find that a weekend spent doing a long run is more enjoyable than a late  night of drinking (not that you can’t do both with enough determination!).

snob: “…a person who believes that some people are
inherently inferior to him or her for any one of a variety of reasons.”

I think if we’re being more accurate rather than snob, you might be a bit fitness obsessed….or not. I’ve updated the signs they provided to include more current gear (i.e. the Garmin instead of a Nike Fuelband).

According to Women’s Health Magazine these are a sure sign you need to be taken down a notch. This article was originally published in 2014 and I wonder now 6 years later if they would consider it true or as times have changed just label you an athlete because athleisure is cool for everyone from celebs to us normal folks.

Breaking news, everyone with a college, family, or peace symbol isn’t just proud of who they are, but looking down on the rest of the world. I always knew people with 2 adults, 2 kids and cat sticker were secretly judging me, it just took WH to point it out.

Pssshhhhh, please anyone I’ve seen with a 13.1 sticker is beaming with pride, not prejudice.

2. “You wear your Garmin Fenix with everything – including cocktail attire”

My white Garmin watch is my “good” watch because that’s who I am…those who judge me for wearing it…snob?

3. “Even your underwear comes from Lululemon”

Brand loyalty people, ha! Maybe if you’re asking about my running undies and then judging me for being commando, well perhaps you’re the snob.

But truly, I find this one amusing because now there are TONS of brands from Reebok to New Balance offering dry fit underwear,Lulu just happened to be early to the game and so like many things initially it was seen as a unnecessary expense.

But who knew I’d be willing to spend $15 on good running socks either!

4. “Your profile is a sweaty gym selfie”

Mine isn’t sweaty, but it’s probably always going to be fitness related. Why does showing off a passion make you a snob?

I actually follow a lot of people on social media whose profile pic is related to working out because it tells me that’s important to them and something they’ll talk about.

If your profile pic is a cat, then I now assume you hate dogs. Profile pic is your two kids, guess you must be thinking you are better than your childless friends. Hey, just going by what this article implies about our choice meaning we look down on those not doing the same.

5. “Zumba is a considered a swear word in your house”

I will give them this one as total snobbery because it speaks to a greater fitness issue that irritates me.

Anyone who believes “their” workout is the only way to do it, be it running, CrossFit, yoga or Zumba is problematic for me. There isn’t one diet, one workout or one lifestyle what works for us all and that’s AMAZING! We learn so much more from each other by being different.

I often find people who know about my running passion, but aren’t runners, feel a need to apologize for it.

You do you. Whatever way of moving makes you happy, helps you to feel good and keeps you showing up consistently is amazing. There are a lot of different ways to be healthy and fit.

Could you be a fitness snob and not know it?! Here are the signs! #fitness Click To Tweet

Are You Fitness Obsessed?

Now this is probably the better question to ask because what I’ve realized is that most of us who do spend a lot of time working out, aren’t really that worried about what anyone else is doing.

It’s pretty hard to be a snob about their choices if your only real worry is you.

But what does it mean to be fitness obsessed because again that could mean a lot of endurance athletes who have to plan their entire lives around enough time to train, eat and sleep!

Obsessed could simply be:

Orrrrrr of course there’s the point where it crosses the line from being something you truly enjoy and becomes something that’s unhealthy. Then you have exercise addiction and that’s a whole different topic for another day.

Are you a fitness snob based on their criteria??

What do you think makes someone a fitness snob? 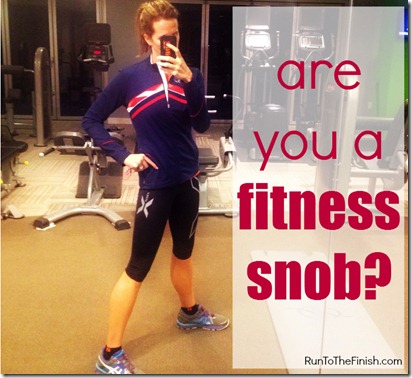