With the 2016 Olympic Trials starting, I had to find this old post…and boy can I see how my writing has changed!! I’ve updated it to include details I forgot…but still don’t judge my current writing on 4 years ago ha!!

Today lived up to my expectations in every single way.

Not only did I get to watch the Olympic Trials with some wonderful new friends, but after the race finished I was invited to attend a Mammoth Track Club party thanks to Coach Kastor, whom I met through Oakley Women. 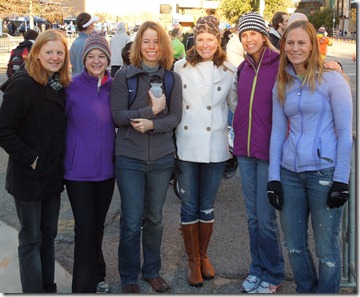 Laura, Kellie, Terzah, Holly, Me, Corey. I had so much fun chatting with these girls…it’s funny how you can be from so many places and connect so quickly. Everyone has different goals for the Houston marathon tomorrow so I’m excited to reconnect after and find out how we all did… and to cheer for them as they pass me. :)

OLYMPIC TRIALS
Kellie and Holly had great ideas on where to meet and so we were able to see the elite men and women race by 4 times!!

Because I needed to document the moment, I took pictures the first time around and then stopped so that I could fully take in the experience. You know they’re fast, but watching their huge strides and arm swing up close is something entirely different than the experience of watching on TV. 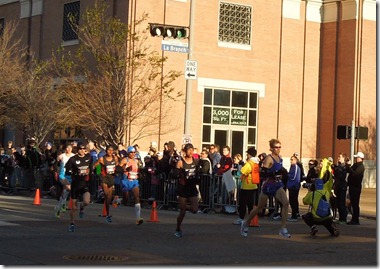 Seeing it in person with a crowd of spectators that were just oozing enthusiasm could not have been more fun, unless it was say NOT 30 degrees.

The elite athletes move with such smooth strides and don’t appear to be dying at their insane paces…just amazing. It’s one thing when you see a few elites at a race, but just a whole different feeling to see a lead pack of men pull away from the field, knowing that it was an outstanding group they were running beside.

I watched it later on tv with our good friends here (providers of my savior jacket) and it was fun to see more of the jockeying that happened throughout the race. For me our location was prime…just before the finish and allowing us to see everyone so many times! Even David said he never got bored because it seemed like either the men or women’s groups were always coming through within 10 minutes or so of each other. 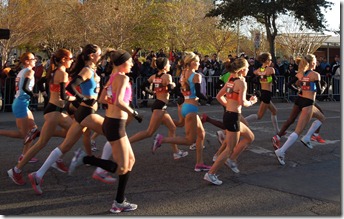 For me it was just as exciting to see the women in the lead as the women who were back of the pack because it was clear they were having so much fun!

You could tell they were soaking in the entire experience and I love that. It’s a testament to what our sport is. In fact one of my favorite moments was a male runner that cramped right at mile 26. He stopped and the crowd paused…then just went in to a roar encouraging him…he took a few minutes and then started to force it that last .2…you could hear the wave of cheers for that entire final .2.

TRACK CLUB EVENT
Later in the day I was very excited to attend the Mammoth Track Club private event. This amazing group had a number of elites on the course today…but even more amazing runners at shorter distances that all came down to support the entire team. {OMG we could have both used a stylist to stop us from leaving our rooms!!} 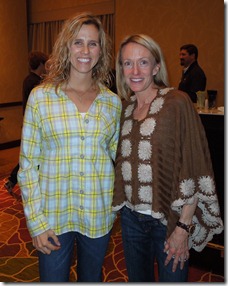 Being tall is really not a qualification for being an amazing runner…thus far I have been taller than every Olympic Qualifier that i have met!! That will change with my Ryan Hall interview in a few weeks.

Deena Kastor is a woman that has inspired so many of us. Coming back to the sport after having a child and having an impressive showing today in 6th place. She was very gracious and up beat throughout the evening. Obviously it wasn’t the desired outcome, but she was still so happy for Meb and just as pleasant as her husband.

Meb was there in his full uniform still having not yet had any time to go back to his room after snagging that 1st place spot. I love that he was even talking about his Sketchers! So they aren’t just a sponsor he totally runs in them and when his family came in his two daughters were sporting their light up Sketchers. 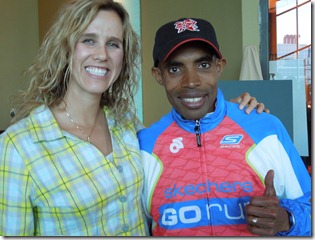 Truly every experience I have had in the running community from the average runner to the elite is amazing. Everyone loves to talk running, has great tips and can relate to exactly what you are going through. Deena was talking about just this point with me and another of tomorrow’s runners…we all go through butterflies, the wall, injuries…and at the end of the day we give it what we can.

All right time to slumber and see what tomorrow will bring. My A Goal as always is to enjoy the day; so lot’s of prayers that is what will happen.