Meeting someone who has inspired so many runners, including myself, should be nerve wracking…but it wasn’t because the topic was running! I can talk running for days! 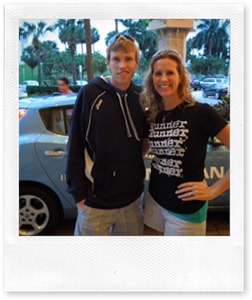 It was also in large part because Ryan is simply a laid back, easy going guy who generally makes people feel pretty comfortable…especially when the topic is running.

My goal was to try and have more of a conversation and less of a hard core 20 questions session with Ryan. Lucky for me we ended up riding from his hotel over to the convention center with a few other folks which made it a great time, a solid 40 minutes to talk and gave me a chance to think more during the show about anything I missed for the ride back!

SPIRIT
For some Ryan’s openness about religion can be a turn off, but I find it really refreshing. He simply is who he is…no regrets and no apologies. He also uses this inner strength that he finds from his spiritual beliefs to help carry him through all of the months of training.

Recently he and his wife Sarah Hall (who has Olympic Trials in June) moved to California so they could attend a church school there. Yup, you read that right. During his 100+ miles of training he is also spending 4 hours a day at school…that my friends is dedication. Ryan says that time actually allows him to relax, recover and mentally get ready for the second workout of the day.

I watched a video of him right after the trials and LOVED his statement that one of his goals is to walk hand in hand with his wife at the Opening Ceremony having both qualified…awesome. 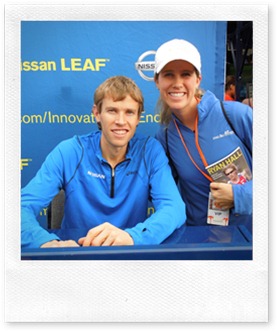 TRAINING
Cross training? Nope doesn’t do it. Seriously? Completely. Ryan isn’t interested in overall well-rounded fitness…”I want to be fast.” The best way he has found to do that is to run…a lot…fast.

Wait but what about Tara Stiles and the yoga stuff she presents with you on Nissan Innovation for Endurance…yup it’s just not this thing. He has tried yoga and can only say he’s really bad, BUT Ryan is very clear that this works for him in trying to get to the Olympics and is probably not what us average Jane’s and Joe’s should be doing.

RECOVERY
ING was held just two weeks after Houston, which was the reason neither Ryan or I were running…don’t let the fact that he runs exactly twice as fast fool you, I needed recovery time too. :) Ryan decided after the trials to take one of his longest recovery periods ever 3 weeks. And I don’t mean the kind of recovery that us nut jobs take where we hop in to daily biking, yoga, etc…he literally is doing nothing for 3 weeks. Again he notes this approach isn’t for everyone, but when you have been training at such a high level for months on end the body needs time to reset. Not just for muscle recovery, but hormones and everything else that happens in your body under that ongoing stress.

Ryan also confirmed my believe in Epsom salt baths!! Being a well known athlete you might assume he sees a massage therapist and has an ice bath waiting…nope. Ryan has 2 tubs in his home and fills one with ice and one with the hot epsom salt, so that the can alternate after really hard workouts. This alternating process makes the ice easier to take but also has a lot of science behind it.

TRAINING
I didn’t ask a lot about his training because you can find all kinds of these questions…but what is cool to know is that Ryan really trains by intuition. Meaning he no longer works with a coach but trains based on how he is feeling and what he needs to do to feel confident and his best. Here is just one of the great videos talking about how he is creative with running. Could you do his workout? 23 miles alternating hard and easy…or even doing workouts that completely flop!

At the end of the day he really does love what his is doing and has known since he was 14 that running in the Olympics was his goal. This dedication to a goal is what appeals to so many of us as runners and why we turned out in droves to watch the trials.

If you aren’t following Nissan Innovation For Endurance on FB you really need to check it out. I have been following it for the last year because they are constantly posting tips, videos and of course giveaways from top athletes like Ryan Hall, Chris Carmichael and Tara Stiles. I won’t like..having Ryan Reynolds involved as of recently hasn’t hurt my feelings.

OLYMPICS
He was obviously still riding the high of having qualified in Houston, but I thought it was interesting that his first Olympics really only fueled his hunger to go back. He is excited for the temperature to be better in London, excited to hopefully have his wife there competing too, excited about everything he is learning training on his own and excited about the opening ceremony. Last time friends talked him out of the opening ceremony and he has regretted it ever since.
————————————————
Gratitude Journal
Feb 7