Home » Our TV Wedding Behind the Scenes

Our TV Wedding Behind the Scenes

A few weeks ago I announced the exciting news that we would be on TV! I fully anticipate we are going to be big stars after this debut. Or not, but hey this was a blast and I thought I’d share some behind the scenes with you to answer all the questions we’ve been getting! 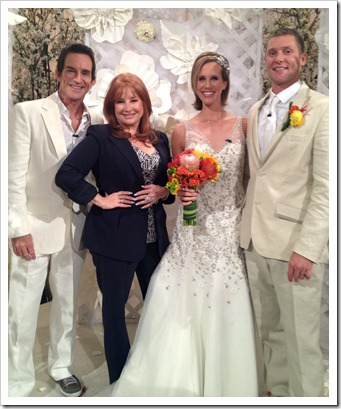 WHY?
We got married in a parking garage. Yeah, seriously our beach wedding outside of Savannah went that awry…when the Jeff Probst Show found the story they brought us out to talk about it and it turns out surprise us with a “Re-do”. My fabulous brother in law cut the video down so you can see exactly what happened and hear about the wedding if you somehow missed that story a few years ago.

ARRIVING ON SET
After spending the morning exploring Hollywood, we headed to the set. As we pulled up the security guard made a comment “Do you only have 2 McLatchie’s in the car because I have a lot more on the list.” and we started to immediately think something must be up. 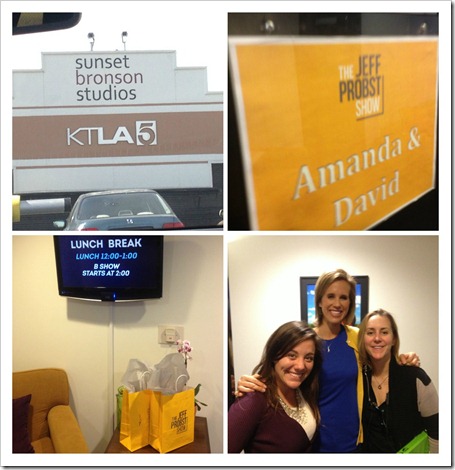 They took us in to our private room, but unlike many of the rooms we passed they shut our door and told us they’d be checking in to see if we needed anything. Hmmm what’s happening around here?! Our adorable producer Michelle and coordinator Yareli were beyond sweet and made us feel comfortable even though we really had no idea what was happening! After about an hour David started to get a little more nervous and was pacing around and yes even doing some push ups. Hey a guy needs to look buff for his TV debut.

Then I headed back to hair and make up, which is now my favorite thing ever. I can see why stars pay to have someone on hand at all times! Everything just looks better after their professional touch and I don’t have to know how to do it! The staff was so friendly and it turns out they all work on TONS of shows. The woman doing my hair had been working on X Factor the night before and the woman who did my make up is one of the only other people to ever be married by Jeff Probst.

Finally all got real when they came in to put on the mic’s. We had been there 2 hours already and no one was telling us much, except to just have fun and that was my motto the whole time. Who knew what was going to happen, but we were there for another life experience.

WEDDING WEAR
Renée Strauss the bridal expert on Brides of Beverly Hills from TLC brought 4 dresses and a number of super cute accessories for me to try on…but there were really only 2 dresses that I wanted to try. The first was SUPER sexy, not something I would ever pick under normal circumstances and just about an inch too small. The second is the gorgeous $7500 gown you see me wearing, which the whole room immediately “OOHHed” at when I put it on, yup that’s how you pick a dress…striping in front of lots of people and waiting for a collective “ooh”! In a weird twist it was fun to find out the dress is by Latin designer Carlos Ramirez who is based near me in Miami! 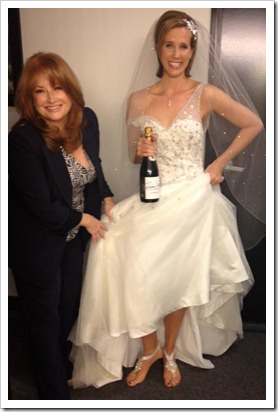 I don’t drink, but they were having so much fun playing with me like a life size Barbie that I was ok to hold the bottle while Renee showed off the gorgeous barefoot sandals I was wearing…don’t I look like I’ve been out partying with that strap falling down?! This helped convince them I needed some double stick tape because the dress was a tiny bit big; I wasn’t up for pulling a wardrobe malfunction. Considering we had about an hour to pull everything together after the initial interview, I think it all came out amazing! The make up team was awesome putting on fake lashes and just generally telling me I looked great, which is pretty much all you want to hear before cameras show up!

To reenact our beach feeling she gave me these adorable Stella’s Design Barefoot Sandals. I wish I had known about these for our original wedding! Skip trying to wear flats or some other footwear in the sand and still get the bling! The headpiece was also gorgeous, but dug in just a bit and left me with a headache. 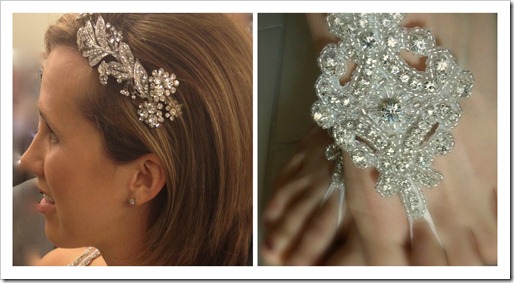 Wonder what David was doing while I was having all my fun?? He was sitting in the room wondering what was happening…and our parents were upstairs anxiously waiting their turn to come surprise us. They were able to see the show and couldn’t stop laughing when we opted not to have the audience join us.

POST TV
The ceremony portion that you see on the show is basically all there was…no full redo of our vows or anything like that just the quick I Do, the rose petals from the sky and then a few minutes laughing with our parents about how we can’t do a normal wedding.

The cake was OUT OF THIS WORLD from Cupcakes Couture of Manhattan Beach. I am not usually a chocolate cake fan, but this was fudgey and moist and it didn’t hurt that it was decorated for a beach wedding. Jeff stood around with us for a few minutes to toast, cut the cake and allow my mom to tell him just how much she adores Survivor. He really is a totally down to Earth guy. I had to laugh though because he kept saying I was so stoic about everything and I thought hmmm maybe they were expecting a bigger reaction from me about the wedding. 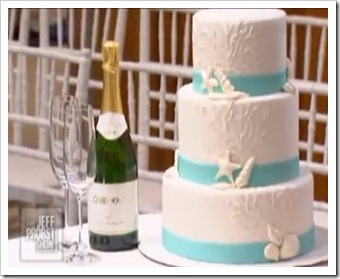 The crew was concerned about boxing it up, but we explained the flight and instead invited them all to join in a line quickly formed…umm what we did not realize is that only the very top tier was cake! Everything else was iced Styrofoam. Ahh the magic of TV, right?

HOLLYWOOD
We finished at the studio around 4PM which meant we had until bed time to hang out with our parents, since we all had early flights. What else is a girl to do but show them how bloggers do Hollywood!! Pictures, signs, walk of fame, you know just an ordinary night. 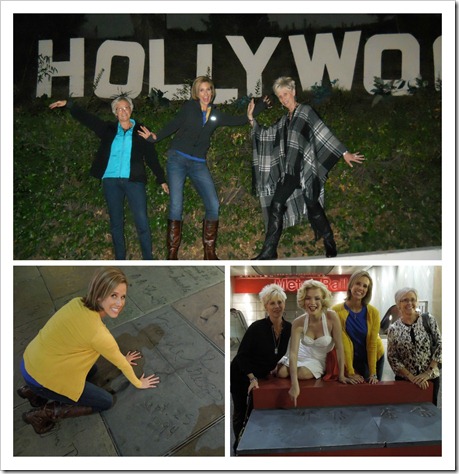 Gratitude Journal
Dec 21
I am grateful for crazy new life opportunities and the chance to share them with the one’s I love.