“Fear is gradually replaced by excitement and a simple desire to see what you can do on the day.”
– Lauren Fleshman

Have you read my initial recap of the entire Runner’s World weekend experience? Let’s just say by the time the races rolled around, I was simultaneously pumped and a little worn out!

How does one run the Hat Trick? {22.4 miles in 3 races in 2 days} Think of it like running a relay race, except you actually get to sleep {albeit on dorm beds}. Beyond that I really and truly paid attention to my pre and post race nutrition, utilizing every last drop of the Vega Sport line. I’m an ambassador so you probably think this is all just required marketing talk, but it’s not. Just the facts.

I also painted a very crisp picture in my mind of how I wanted each race to go: 5K warm up, 10K goal race, half marathon party time. {Ok more like a foggy crystal ball kind of picture}

5K
29:54 finish time
My goal was to start out with a steady easy pace and never push outside the low end of my heart rate. I wanted it to be a warm-up for the 10K, which meant my low heart rate training was about to pay off big time…I mean I could have paced Shalane after all we are like BFF’s now, but I figured I would let her do her own thing. 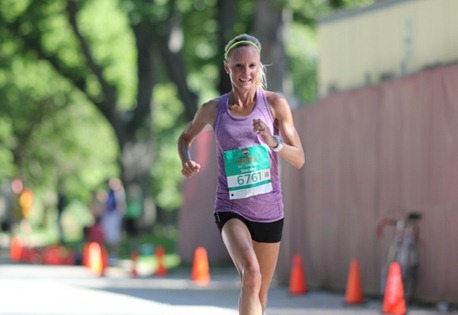 Photo from Runner’s World
Paying attention to my heart rate was the perfect way to not get caught up in the excitement or flow of the crowd. I wish I’d taken advantage of this to snap a few more photos because it really was gorgeous along the reservoir and around the entire Boston College campus. 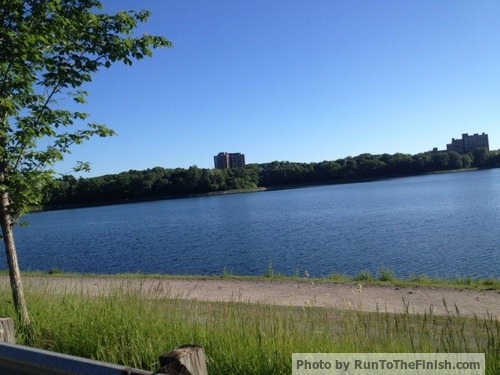 But honestly I was just enjoying the journey…and realizing that in my attempt to avoid being cold I had WAY overdressed. That being said this Running Skirts top was freaking amazing and cute! 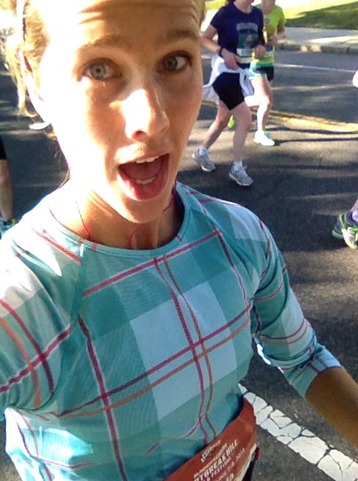 The 5K was the flattest of the 3 races and yet still had a fairly nice hill, which was my clue the next 2 races might be tough…but what else would one expect from a race that encompasses Heartbreak Hill. 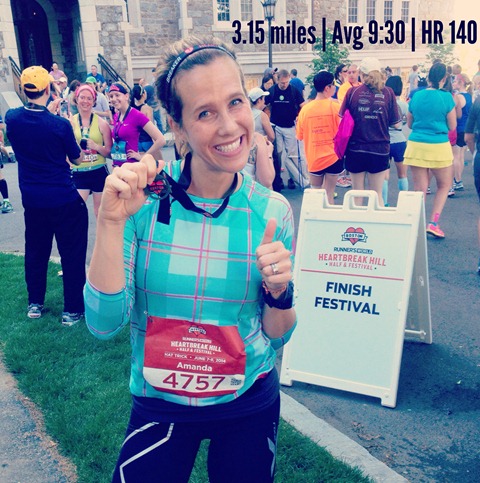 10K
49:32
After the 5K I had about 45 minutes to hit the porta potties (see I was hydrating well) and munch on 1/2 a bagel…it was cool they served local food…but why can’t we serve something besides Gatorade?! Skipped that for more of my Vega Sport electrolytes. 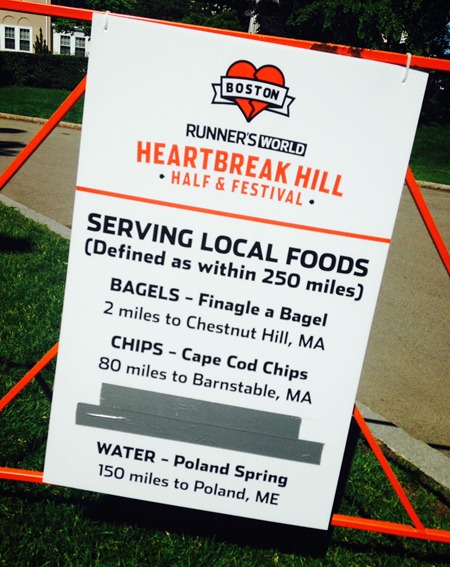 And of course plenty of time to grab a few more selfies…before lining up once again with my new medal shoved solidly inside my Flip Belt. {Above photo from HTP, below PR team Beachy, Larisa of 0to26point2, Dani of Weight Off My Shoulders and BOOM Nancy Clark the amazing sports nutritionist!} 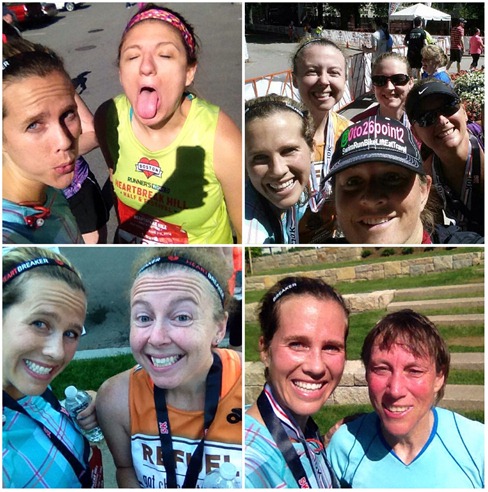 Ready to put up or shut up, I decided to lay it all out, put it all on the line and as I had heard in many speeches be brave {how many cliches can I use}.

Was this an ideal PR attempt?? Not really since my last 10K was years ago, I haven’t done any speed training with LHR, it was H-O-T with very patchy shade by the 8:30 start and of course we’d be climbing the infamous 3 miles of the Boston marathon course that include heartbreak hill. 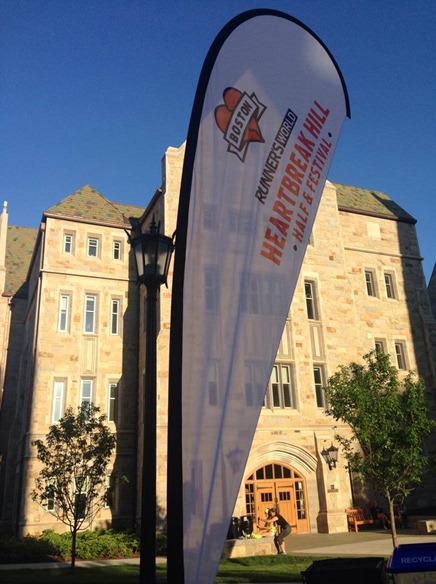 Wind in our faces for the first three miles on this out and back course, I knew that returning up hill without the breeze was going to require 100% commitment to this goal.

I just kept asking myself to be brave enough to try each time it seemed too hard.

Hitting the 4 mile marker, my watch said 4.35 and I almost called it quits on the spot. In the middle of that big freaking hill, my brain said no way to maintaining that pace for an extra .35 miles.

But I kept hope that maybe it was misplaced and sure enough at 5 miles I was matching up again.

I would have been supremely happy no matter my finishing time because I am finding a new gear in my racing. Now I can dip in to that place of being uncomfortable and still enjoy myself. 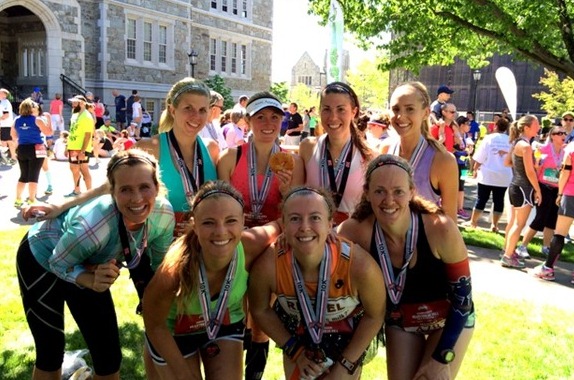 I was mentally ready to embrace the discomfort…and I did earning myself a beautiful 3 second PR. Yeah you read that right, I did a celebratory dance for it too since my last PR was a pancake course. It definitely made me want to find a friendlier course and do it again. 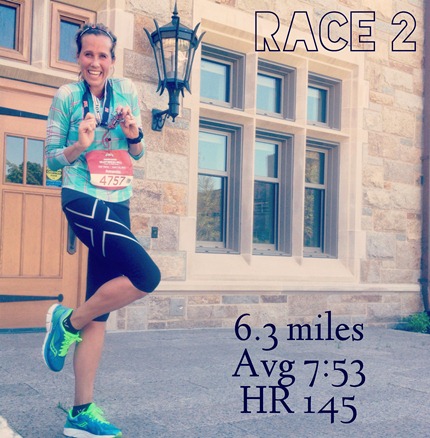 Half Marathon
2:08:04
Initially Karla was hoping to break 2 hours so I volunteered to help pace her to this elusive goal. Around mile 4 she tossed in the towel as it was just one of those days that we all have sometimes in running…this photo at mile 3 showing our seriously sweaty faces might explain why it was “one of those days”. 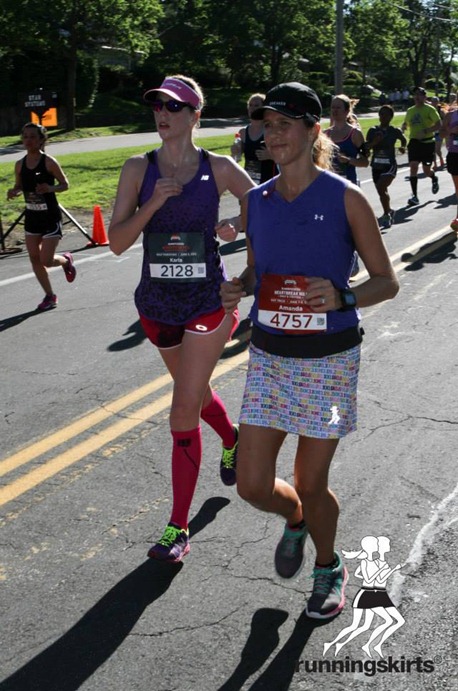 After walking with her for a bit, I got the impression it might be best to buzz off so I caught up with Theo, Anne and Dani to have a lot of very hot hilly fun. We took pictures, walked the water stops (new to me) and cruised in around 2:08 feeling good rather than beaten down. It was perfect. 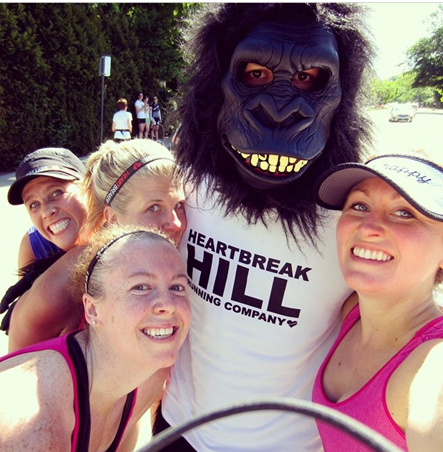 I would say this course was tougher than the Runner’s World original event, but I think that is largely due to the heat and lack of shade. In general it made me TRULY crave more hills for running, it’s just so much more fun!!!

This was the elevation chart for the Heartbreak Hill Half Marathon:

Just for funsies here is a elevation chart of a Florida race, notice it only goes up 20 feet..those are bridges.

Heading up the final hill to the finish, photo from our friends at RunningSkirts.com 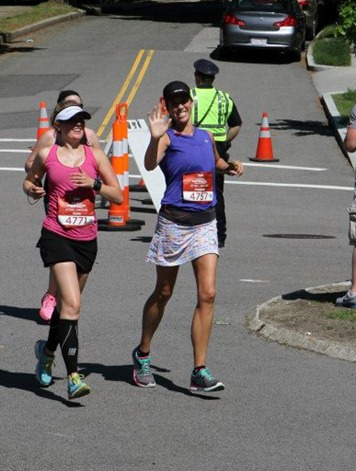 Overall I couldn’t have asked for a better Hat Trick experience. Of course a bigger PR is always fun, but I ran my own race, learned some new things and made some memories forever with new friends.

Have you ever done multiple races in one weekend?

Would you like to do one of the Runner’s World events?