Over the last two decades as a runner and running coach, I’ve talked a lot about different types of training programs and what to look for in a program. Recently, I’ve been providing breakdowns on some of the most common marathon methods, which today brings us to Run Less, Run Faster.

Originally called FIRST for the The Furman Institute of Running and Scientific Training, it gained a much more popular name thanks to the book by Matt Fitzgerald.

Billed as an ideal way for runners to prepare for their first marathon running only 3 days a week, this program requires a focus on training intensity to achieve the best results.

Created by Bill Pierce and Scott Murr as they began triathlon training and found time/energy wasn’t available to complete the standard long weekly mileage of most plans. This started a journey in the early 80’s that lead to some specific studies in 2003 and 2004 that proved a theory they’d been testing themselves.

The two discovered through a number that running 3 days a week with cross training maintained fitness. In fact, during their initial studies they found that it not only maintained, but improved fitness.

Based on lab data the participants improved running economy by two percent, VO2Max by 4.8 percent and lactate-threshold running pace by 4.4 percent.

Further studies and work with athletes lead to the full FIRST training program which they believe is an optimal mix of hard running and cross training to achieve optimal results.

From the data they ran a number of people through their plan in 2004 and it has continued to be a mainstay of their training principles since then due to the success.

For them training intensity was the key to creating results with the Furman marathon training plan.

The goal of this style is to prevent overtraining through less running, yet the complete intensity of all runs could be exactly what causes it in many runners.

Run Less, Run Faster is targeted towards many who are doing a first marathon and I admit I’m not totally on board with that. I think if you have a high level of fitness or have been running sub two hour half marathons it might be a good fit.

But for many other runners the intensity is going to be drastically higher than what they’ve been doing which leads to injury. Too much, too intense, too soon are the 3 most common causes of all running injuries.

Who Should Use Run Less, Run Faster

That being said, training for a marathon when busy is rough and this is going to make it easier. It’s also ideal for all of you who have fallen in love with using your Peloton bike!

Who Should Not Try Run Less, Run Faster?

As noted, I don’t believe this is actually a good First Marathon style of training. Some will disagree with me and that’s totally fine! I’m going based on the thousands of runners I’ve coached who are middle and back of the pack runners.

Opponents argue that this training style does not build enough mileage each week to allow the body to adapt to the rigors of running 26.2 miles without injury.

Or that training only 3 days a week is not enough for substantial improvement, the data says that isn’t true for all and that’s why we have different styles of training.

As noted, I have not tried this method of training {mostly because it doesn’t appeal to me} so here are two women that have used it and found success:

Most importantly though I really got comfortable with tempo and speed workouts so that when I transitioned to other types of training, these were not overwhelming or foreign to me.

Beth – After getting injured with another plan, Beth returned to the FIRST method and ran a 3:49.

I ran my first two marathons using this method and ran 4:20-4:30 times for both {though the second was part of the Goofy Challenge}.

The next marathon, I used a Pfitz plan and got injured with a femoral stress fracture. After that I went back to the FIRST method and ran a 3:49. The rest of my week consisted of two days on the bike trainer (45 min-1hr) and one yoga class (90 min). 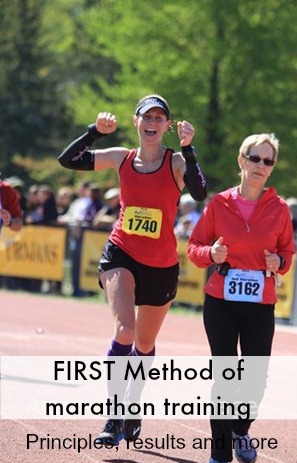 Looking for Other Marathon Training Ideas?

6 Best Hip Mobility Exercises and Why They Matter
Next Post: Hoka Running Shoes Review: Clifton Vs Bondi and More