After another Physical Therapist pointed out that women are more prone to running issues due to our hips, I began to wonder if this was entirely true. Do women run differently? Why is it accepted that men are faster?

I decided to reach out to Tina Muir who is not only an elite female athlete, but is surrounded by high caliber coaches and runners…here is what we found.

When I consider the differences between men and women, my thoughts go back to the many occasions in college where I destroyed some of the guys on my team in every workout, yet somehow they would run 15:30 5k, and I would run 16:10. How was that fair?

What are a few of the major differences between men and women that could contribute to those race times?

Unfortunately, women are at a disadvantage from the start due to a few biological factors, but there are also some potential advantages to being a female that you may not have considered.

This isn’t a post to pit men vs women and find a winner. Instead, we’re looking at the physicological differences that might help us understand why we ladies can train for months and our male friends can come join us without a single training run and keep up!

Heart Size
Men’s hearts are 20-25% larger than women’s, particularly in the left ventricle. This increases the ability to pump oxygenated blood around the body to be used in the muscles, making it easier for males to run faster for longer.

This means that on average male blood can carry around 11% more oxygen than female blood to increase efficiency to run faster.

Estrogen does have one big advantage over testosterone; it is an antioxidant that fights some forms of free radicals around the body. Female runners can also use their cycle to their advantage, find out how!!

Body Fat
Women are predisposed to hold an additional 5-10% body fat for child-bearing. The extra weight of this body fat means the female body has to work much harder to run an equivalent pace.

Injuries
Women are considered at a higher risk for injuries than men, particularly bone injuries due to the loss of estrogen (especially if amenorrhea – loss of menstrual cycle is also present).

Additionally, as Amanda’s PT pointed out women have a wider pelvis, and slightly different hip positioning which increases stress on all the lower extremities and often leads to more injuries.
{Another good reason to do those hip exercises!}

Ever wondered how running is different for men vs women? What benefits does each gender have? #running #runchat Click To Tweet

Muscle composition
There is no real difference between the composition of muscle fibers between men and women, but men will develop muscle faster than women due to higher levels of testosterone.

But just as one training plan does not fit all, not every man can run more miles than every woman. I run around 80 miles a week during marathon training, and I know most men could not handle that kind of volume.

In my experience, the access to coaches is the same between men and women, some coaches even prefer to coach women over men, as there are less ego issues!

Participation Levels
There has been increasing debate in recent years about whether women will eventually catch up with male performance times. Although the factors I’ve noted may make it seem almost impossible, women currently only make up 27% of participants in distance events. In addition to this, the first women’s marathon was only in 1972, compared to the first men’s marathon in 1896!

As participation increases and more female superstars emerge, we could see the gap between men’s and women’s world records drop significantly. Oxford University completed a study that predicted one day women will consistently beat men over long distances.

In ultra events, women may have an advantage over men due to the additional fat stores than can provide an additional energy source for the body. This means that women may in the future be shown to be the better athletes in endurance events.

As we work to understand the physiology of the female body, new research will surely discover how to maximize the female physiology, lessen the gap, and continue to take down records at a much faster rate. 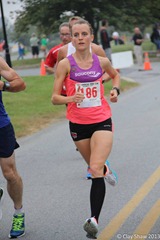 I am doing my part, are you?

Tina Muir is a Saucony Sponsored Elite Athlete who finished 3rd in the Great Britain Olympic Trials in the 10k in 2012. She has PRs of 16:08 (5k), 33:24 (10k), and 1:14 (Half Marathon). Tina will be testing her endurance at the Chicago Marathon next month where she will race as an elite in a very talented field. Check out her blog at www.tinamuir.com for healthy meals, training tips and updates or connect with her on social media: Twitter-@tinamuir | Instagram –tinamuir88 | Pinterest–tinamuir88 | Facebook- Tina Muir

Thanks Tina!! At least now I feel marginally better about my husband always running faster than me with less training!
What do you think?

Will women close the time gap?

Any other differences you’ve found in how men/women handle training or races?

Race Pace Envy: Stop Judging Yourself By Their Speed
Next Post: Suunto vs Garmin: Which GPS Watch Is Better for You