Home » Recipe » dessert » Why We Need to Eat a Big Breakfast and Can it Be Cake?

Why We Need to Eat a Big Breakfast and Can it Be Cake?

At least once you’ve had cake for breakfast and it was…awesome.

I remember in elementary school seeing my dad sneak a piece of cake with his coffee at 5AM before heading out the door and I wanted so badly to be old enough that someone couldn’t tell me no! It should come as no surprise that I absolutely started doing just that in my teenage years and minus the weight gain it was glorious!

Is Dessert ok for Breakfast?

In Feb 2012 magazines and news outlets started hyping a new study that they boiled down to this:
“Eat dessert with breakfast and lose weight”.

This message is every dieters dream come true, except of course that wasn’t really the whole story…not to say I wasn’t gung ho to give it a shot, who cares that I was a chubby teenager and have a massive sweet tooth {hmm red flags?}

A short summary of the study:

193 obese adults: half were randomly assigned to eat a large, 600-calorie breakfast that included a “dessert” item, such as a cookie, cake or donut and the other half a 300- calorie breakfast.

After 16 weeks, both groups lost about the same amount of weight. However, during a follow-up period in which participants were advised to stick to the diet, the small breakfast group gained 24 pounds, while the big breakfast group lost 15 pounds, on average.

Why We Need to Eat a Big Breakfast

The immediate take away from this study should have been EAT A MORE SATISFYING BREAKFAST.

But that headline is far too boring to sell, so instead they focused on the idea that by indulging your sweet tooth at breakfast you will reduce cravings because you never feel deprived.

Personally, I liked that theory and tough as it might be I was totally willing to test out eating more dessert.

I started eating more dessert all the time.

Instead of lessening my sweet tooth, it seemed to just ramp it up. I am sure there are  a couple of reasons why this happened:

1. I know that eating a high carb breakfast {hello my lovely donuts} makes me hunger within hours.
2. I don’t subscribe to the idea of denying myself. Before this study, I already gave myself latitude to enjoy a piece of chocolate in the afternoon or a cookie when I really wanted one. So this extra permission seemed to act as a free for all in my brain.

Once I stopped with the dessert at breakfast concept, boom cravings began dropping.

Now I’m back to my normal routine with a focus on protein in the AM and I can tell all day long this makes a difference in my appetite and cravings. Now that we know the benefits of a high protein breakfast, let’s talk ideas!

Benefits of Eating a Big Breakfast

It turns out eating more to start your day could actually be really beneficial. While this flies in the fast of Intermittent Fasting, it does go to show that we’re finding issues with for women who go very far over the 12 hour mark and those who stay in ketosis too loong. 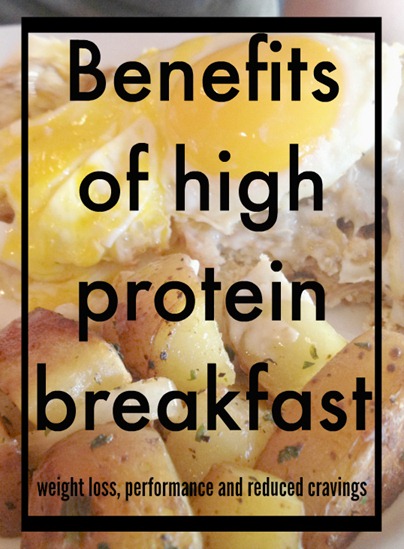 Benefits of a higher protein/larger breakfast:

Since I had to cut out eggs and dairy, my post workout breakfast often looks a lot like lunch! I love my veggies, hummus and tempeh or a green smoothie with Vega protein and a slice of bread with avocado and turkey.

Need some meal ideas to improve your own breakfasts! Here are 6 great resources with almost 100 recipe ideas. Pin them now and thank me later…but first share them your friends! 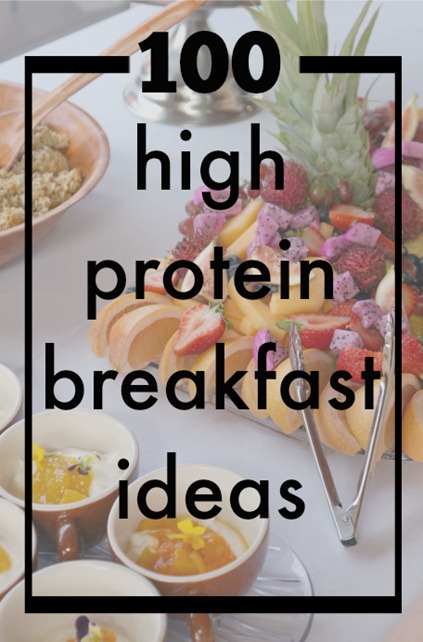 Did you see the cake for breakfast study?

Admit it, when did you have cake for breakfast??
We did the day after our wedding and it was perfection.

Could your pain be all in your head?
Next Post: Lentil Bars – Healthy, Quick, No Bake, Breakfast Bars