Running with the Kenyans

Have you ever wondered why Kenyans seem to dominate the marathon? If you’ve watched any of the major races in recent years, surely you have as the numbers are staggering…

“In 2011, sixty-six of the worlds top one hundred marathon runners were from Kenya… the top twenty fastest marathons of the year were all run by Kenyans.”

One man decided to move his entire family {wife and 3 children} to Iten, Kenya the home of the majority of Kenyan professional runners. His inside look is illuminating about the culture, their lives, their training and what can those of us in the West take away.

Running with the Kenyans: Discovering the Secrets of the Fastest People on Earth is a fairly recent release {2012} so I’m impressed it made it into my LONG list of running books so quickly!! But who hasn’t theorized about why they are faster?? Would his time there prove us all right or wrong? 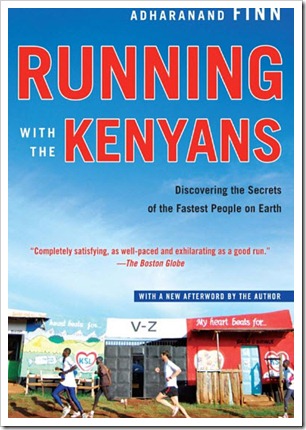 Can you imagine a start line where the slowest runner will complete the half in around 1:35?? {yes that includes children!} Fin’s 6-month journey through the life of runners in Kenya is extremely eye opening and a reminder at how different our American culture is in so many ways from the rest of the world.

“When people in the Rift Valley decide to become athletes, they don’t fit their training in around a job or college course, as we might in the West; they dedicate themselves to it completely. A daily diet of run, eat, sleep, run.”

Reading about the stories of people who have so little and yet their families fully support this lifestyle for the possibility of what it might bring. They allow them to live away from home for years, sending any money the family has to support them. Even those who have won races come back and while purchasing homes, often settle back in to a training camp with very little and keep their food very minimal. They don’t become distracted by THINGS as we see with many Western athletes.

I don’t know that this book will motivate you to hit the track, but I can’t think of a single runner who wouldn’t be engrossed by the stories and intrigued by the information. I call it a must read << which I don’t do lightly! What is it that makes them so fast? Running as children to school…a need to win to support family…simple focused living…genetics…you’ll have to read and decide for yourself.

July 16
I am grateful for those who are adventurers and explorers of the world. Through them I am inspired to step out of my comfort zone and continually learn about the world.