Living in Miami one might assume I’m used to seeing famous people strut the streets…but honestly I’m asleep by the time they go out. SOOO…yes, I was a bit awe struck at meeting people who I followed with amazement over the last couple of years.

OREGON TRACK CLUB APPEARS
In the days leading up to Miami RNR the Facbeook posts and Tweets were flying about the appearance of the Nike Team (really the Oregon Track Club sponsored by Nike). While the men were amazing and absolutely rocked the course, my focus was on two of the three female runners that have become inspiration for many women; the third being Deena Kastor in my opinion. 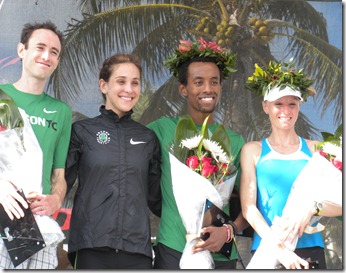 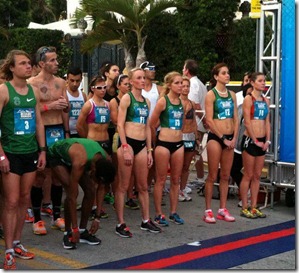 This is basically how close I thought I would get to these amazing runners (Shalane clocked the fastest 2011 half marathon in 1:09)…BUT being one of the luckiest days of my life, I was actually able to spend about an hour with both ladies after the race when they politely asked if they could sit at my table. 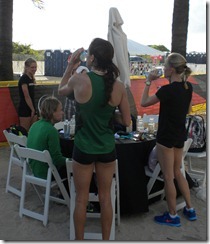 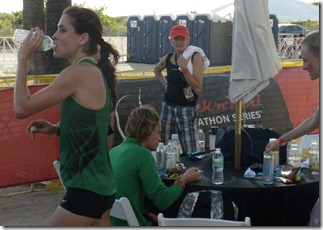 Again this was as close as I thought I would get, so I was trying to take pictures without being the person to bug them…turns out not that many people asked and they are so nice it didn’t matter! The gal in the orange hat is Shalane’s mom and I had a great time talking with her too! She has a photography site called PrettySporty with more great photos from Miami Beach RNR! 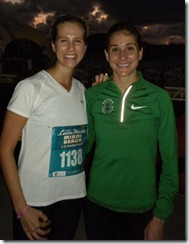 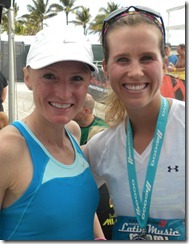 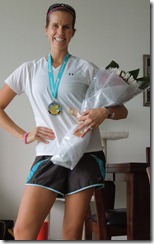 Me with Kara Goucher, Shalane Flanagan and then with Shalane’s flowers which she gave to me because she couldn’t really travel with them…super! I don’t think my pose was as good, but 4 hours post race I was still glowing.

It was amusing because in talking both with the men and women from Team Nike there was a consistent question of…”how do you deal with the humidity here?!” This was followed by discussions of how Houston will be flatter and no humidity, so I should feel really good about that race. My initial self consciousness about not wanting to be the girl who peppers them with questions fell away and we just chatted…I wasn’t that person and they were more down to Earth than I could have imagined. If it all sounds so NORMAL, well that’s because it just was. The coaches kids were there and we talked with them, talked with Shalane’s mom, talked with the rest of the team and it was just very relaxed.

CONNECTIONS
Cloud 9…out of body experience…pick any of the clichés you want they all apply. I was super excited to simply spend an hour with the girls, but then after Pitbull finished performing I started talking with the Competitor Group SVP Event Director and that was fascinating because in my mind the person behind this must be all business…clearly he has a great business mind, but it started because he has a passion for the sport. He was so generous with his time for everyone that came through and it was just refreshing to see!

He then introduced me to Jackie Stiles (2001 WNBA Rookie of the year) and the rest of the men from Team Nike…Simon Bairu, Brent Vaughn and Tim Nelson. Once again these guys were kind, funny and totally down to Earth…eating their pancakes and talking about how the humidity in Miami sucks. Amusing since in December I was thinking it felt pretty good being half of what it is in the summer. 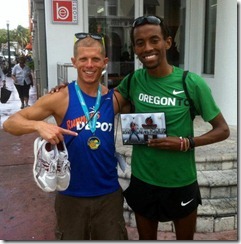 INSPIRATION
Will meeting them change my life? Am I now going to start shooting for Olypmic dreams? Well no…I’m not terribly interested in cutting 41 minutes off my time, but it certainly allowed me to think differently about my limits and pushing myself.

The entire day also underscored my intense love of everything about the sport and how much I want to continue to be immersed in it however possible. I feel truly blessed to have had this chance and for the courage to have involved myself and my recent practice at being present to really enjoy it! Fingers crossed maybe I will see them all again in Houston!!

Dec 13
I think this whole post underscores an intense amount of gratitude for the experience I was able to enjoy on Sunday…so I’ll just leave it at that.