What are the best half marathons in the US? The most fun half marathons? Well some of that depends on what you like, but I’m pretty sure there are a few key components that apply to them all.

Number one: It makes a great Racecation – why isn’t this word in the dictionary yet? I mean it’s in the Wiktionary, so I think we all know that means it’s clearly part of the standard lexicon…of runners. A beautiful place to run and make it a great excuse for a vacation, and maybe even your first half marathon ever!

Mini-me and muggle have been deemed dictionary-worthy words of our lifetime, so I think it’s time to begin a pursuit of expanding the world’s knowledge of a racecation. I’m going to guess the main issue is that runners are too busy DOING something else to fight for this word.

Which is totally cool because that means, we’re also finding excuses to travel more! So let’s talk about the best half marathons in the US (and a few I love outside the country)!

Race vacations have become a staple around here, much to my husband’s chagrin as it always means a few days of not seeing much, followed by a few days of hobbling around…none the less it combines my two favorite activities of travel and running so he humors me and we continue to roam!

Destination races can be a great opportunity to PR (especially if you’re coming down from running at altitude to sea level!!), but often they’re just a chance to explore a new city in a way that you love.

If you haven’t done a racecation yet, I highly recommend it! I mean imagine running through the old walls of Jerusalem…MEMORIES!!!

In truth, not one of the 9 marathons I’ve completed has been where we lived!

I liked that added bonus for race day and while it can also add some stress, here are the main reasons I think it’s awesome:

Anything Different in Planning for a Destination Race?

Training for a race in another state seems to add a little more umph to many people’s training because of the additional cost involved and the excitement about exploring a new place.

Unless you’re going for all 50 states, try to plan a little extra time around these races to enjoy the sites. That’s half the fun of a destination race.

A few tips to planning if this is your first:

Best Half Marathons in the US (By State)

While I certainly have a list of my personal choice for best half marathons, this is not simply from my brain alone, it’s from yours too!

I gathered your answers for coolest half marathons, consulted my marathon maniac friends (yes those who have done hundreds of races), investigated what Runner’s World and a few others had to say and voila a list was born of the best half marathons in the US. 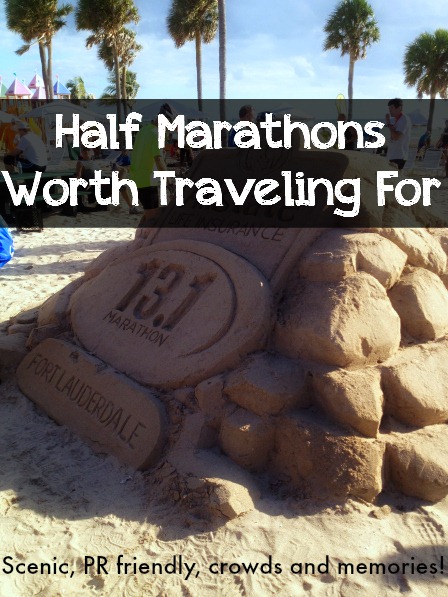 The key to a half marathon worth the travel:

Here were the components we looked at in making this list.

Now more than ever we’re lucky to have a HUGE variety of half marathons to choose from in any state because it’s such a popular distance. Which means there are likely some races that would be considered top half marathons which might not appear on this list.

The Anchorage Mayor’s Half Marathon and Marathon is held annually on the summer solstice and is the perfect way to have a full Alaska experience.

It’s a wonderful day to celebrate the end of summer while enjoying the scenic views of Denali, forested trails, and waterways, as well as the lovely views of the Alaskan wilderness and wildlife.

There are segments of trail to explore, as well as plenty of opportunities to check out some wildlife. It’s a great time to go there when there are 19 hours of daylight. But you’ll still be running at 7 AM, so no worries about a midnight start.

This is not an easy half marathon, but boy is it pretty. If you decide to run it, know that it’s a trail race for all skill levels through the magnificent Kaibab National Forest just outside the North Entrance to Grand Canyon National Park. Definitely expect some elevation with this one!

After you’re done with the race, I recommend enjoying the rest of the weekend at the Grand Canyon creating new memories with that scenic view. This is definitely a race you opt for the beauty, not a PR.

Santa Barbara and the nearby Santa Ynez Valley are great places to go running on vacation. The Santa Barbara Wine Country Half Marathon, which takes place over Mother’s Day weekend in early May, is the ideal justification for traveling to this paradise for outdoor recreation.

There is a wide variety of things to do in the area, from relaxing on the beach to touring historic towns and missions, from shopping to dining, and from wine tasting at wineries to touring vineyards.

Another great one is the Napa To Sonoma Wine Country Half Marathon! It has been named one of the top 7 most scenic half marathons in the US by Forbes and features a point-to-point course past some of California’s most well-known vineyards

This race, which takes place in July every year, is distinguished by the pastures, vineyards, rolling hills, and valleys typical of wine country. It starts at Cuvaison Carneros Winery and finishes at City Hall in Sonoma Plaza.

Plus, instead of a typical sports drink, runners can enjoy a glass of premium wine after the race.

And if you were to ask me, the one that remains on my bucket list and needs to be added to yours is the Surf City Half Marathon! Here’s why you’ll love it:

Now that I live in Colorado, I get to enjoy the mountain views frequently, but I was still blown away by the Steamboat Half Marathon. Expect a net downhill course, that’s beautiful, a small finish line with breakfast burritos, and the perfect spot for a cheap CO vacation because it’s the off-season.

It’s seriously no wonder that this half marathon and marathon are ranked part of the ‘Top 10 Destination Marathons in North America.’

Another great choice is the Golden Leaf Half Marathon. This difficult course offers the kind of rugged trail running that Colorado is known for. The best hiking trails in the area are nearby, and charming mountain towns like Snowmass Village and Aspen are especially beautiful in the fall when the leaves are changing colors.

If you want a scenic view with the possibility of a half marathon PR, this incredible course with stunning views is for you. It’s no surprise that the Chicago Half Marathon appears on every top ten list.

The race starts in historic Jackson Park, goes through the beautiful Hyde Park neighborhood, and ends on Lake Shore Drive, where you can see Lake Michigan.

Having lived in FL, I will first say be prepared for the humidity if you are traveling here for a winter race. I found a lot of friends wilted at the Miami marathon because they didn’t realize how much the humidity would impact them.

When picking a half marathon in FL, consider the 13.1 Fort Lauderdale. It has a beach finish line which is so fun and just up the road from Miami!

Another great one is the Space Coast Half Marathon. It’s truly an interesting one to run, considering it’s held right near race the Kennedy Space Center, and so the entire event revolves around a space theme that you’re definitely going to love!

We got married here, it’s a super cool island! I mean, ignore our weird wedding story and just focus on the fact that it’s outside Savannah and gorgeous. They want you to enjoy the day, so they have places for you to change post-race.

Really any race here seems to be a winner in people’s recommendations, though be prepared for heat! I helped paced Jodi to her first marathon finish during the Honolulu marathon and it was stunning to see the beautiful rain forests, but extremely crowded (and no half marathon).

A stunning one you can consider is the Hibiscus Half Marathon. One of Oahu’s most breathtaking locations, the 300,000-year-old Diamond Head crater, is where this Labor Day weekend race starts.

For much of the route, you’ll be able to see breathtaking ocean views of the Pacific Ocean, which also takes you through Kapiolani Park and past the Honolulu Zoo.

The route is coastal, so you get to see all the beautiful sights the island has to offer, like its pristine beaches, wild forests, rugged volcanoes, and lush tropical rainforests.

The Run the Bluegrass Half Marathon is often referred to as ‘America’s Prettiest Half Marathon.’ The course lives up to its reputation as being stunningly beautiful as well as difficult and motivating.

It takes place in the historically significant city of Lexington. The Keeneland Racecourse, which is a historic site in and of itself, is where the start/finish area is situated.

The course typically does not flatten out for very long stretches, so you can anticipate seeing horses and lots of green, grassy rolling hills the whole way.

More than a race this really is a weekend of events. You can visit distilleries, horse farms and so much more. The race itself will take rolling hills through the Thoroughbred farms.

This US half marathon with a nautical theme will appeal to you if you enjoy New England’s leisurely pace with its beautiful scenery, charming small towns, lighthouses, historic war sites, and miles of beaches and coastline!

Portland’s bay is a beautiful place to go for a run, with 13 miles of waterfront to explore, colonial buildings, and a cobblestone finish.

If you’re going to Vegas, you might as well enjoy running on the strip right?! Rock N Roll Las Vegas is the only one to shut down the strip for you at night.

Following a sunset start, almost the entire 13-mile course is run on Las Vegas Boulevard, with a fitting finish at The Mirage Casino. Just be aware that it’s cold and they have had a number of hiccups with logistics.

These didn’t make it into the top list from everyone but were certainly worth a notable mention.

Recommendation: Nashville Rock N Roll Half marathon (my first race ever in 2002!!)

Recommendation: Thelma and Louise Half Marathon

Ok I couldn’t finish this off without including a few international options because, well honestly, they’re on my destination race bucket list!

There are so many more amazing scenic half marathons and best half marathons around the US that I’m going to have to keep updating this list annually to stay on top of them!