How to Identify and Correct Tight Flexors After Running

You might have heard the term ‘tight hip flexors’ and wondered if it applied to you. Chances are, it does!

When there’s tension around the hip flexors, it makes the hips feel tight. Your lower body’s movement depends heavily on a group of muscles called your hip flexors, which are located around the top of your thighs.

They provide you the ability to walk, kick, bend, and rotate your hips. But if your muscles are too tight or if you move quickly, you can stretch or tear your hip flexors.

If you’ve ever dealt with tight hips after running, then it’s time to learn about what’s causing it so you can put an end to it.

What you might be surprised to learn is that it’s probably more about what you’re doing when not running!

In this article, learn what your hip flexors are, the signs to watch out for, and also what you can do it loosen tight hip flexors including some useful stretches.

What are Hip Flexors?

Hip flexors are a group of muscles that go along the front of your upper thigh. These muscles help you move easily by allowing you to bend at the waist and elevate your leg.

They consist of the iliacus, the psoas major, the rectus femoris, and the sartorius.

The iliacus and psoas major combine to form the iliopsoas, the primary hip flexors. When you walk, run, sit, or stand, they work together to flex and stabilize your hip and bring your thigh and torso together.

Tight hip flexors make it difficult for your pelvis to rotate properly, which can affect various other sections of your body because the hips link the lower back to the legs.

Signs of Tight Hips in Runners

How to know if you have tight hip flexors?

There are some common symptoms, but the truth is that hip weakness and lack of glute strength are the primary drivers for most running injuries.

Pain or discomfort in the front of your hip that often grows worse with extended sitting or repetitive hip-flexion exercises like running and cycling are symptoms of tight hip flexors.

Some other signs of it include:

What is an Anterior Pelvic Tilt?

There’s not much we can change about our daily computer usage or the amount we sit at work – but there are simple things we can do at work to reverse the daily stresses of sitting which can lead to what is called an anterior pelvic tilt.

This is is when your butt is pushed back, curving your spine forward and often the chin then juts out.

This graphic provides a base example, but for many it’s more exaggerated as the hips get tighter and pull the lower stomach more forward. 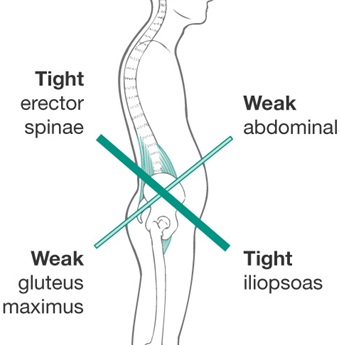 What happens in this poor running posture?

How Do Tight Hip Flexors Occur?

Your hip flexors are engaged whenever you bring your knees toward your body.

This movement can cause strain if you do it repeatedly. Some common causes are sports that use the hip flexors a lot without doing anything to counteract it, like dancing, running, and martial arts.

The iliopsoas muscle gradually weakens as a result of prolonged sitting, which another one of the reasons we get tight hip flexors.

Another common cause is having a weak core, which makes the hip flexors work harder to support the spine and stabilize it.

If you don’t have enough core strength to maintain a tall posture during a long run, then your hip flexors will step in and try to assist. This overworks the muscle which leads to fatigue and tightness.

So if you’re stretching constantly with no results, it’s time to focus on strength!

Stop me if you’ve heard this story before: athlete wakes up early to go for a run before work, doesn’t have time to stretch after, then proceeds to sit at his or her desk for 8-10 hours working on the computer.

Or here’s another scenario: athlete sits at work all day, goes for a run that evening without warming up, then doesn’t make time to stretch after.

Unfortunately, most athletes commit one or both of these errors on a regular basis.

Our computer culture has taken a toll on our overall posture (see the negative effects of sitting). Activity and inactivity both contribute to soft tissue restrictions and can impair quality of motion.

While I’m not worried about anyone here having a sedentary lifestyle, just sitting in the car to drive to work, then at the computer, then on a bike… it all adds up.

I might go a step further in saying that it can actually prevent an athlete from achieving his or her peak performance.

Think of how your body is positioned when you sit:

What Do Hip Flexors Do in Running?

In conjunction with the quadriceps are the hip flexor muscles which are a group of muscles that connect the pelvis to the quadricpes. They are key in moving you forward and stabilizing your body.

So many muscles are worked during running that we often forget the smaller one’s like hip flexors.

How to Correct Tight Hips After Running

Remember I mentioned that a lot of what you need to do is prior to your run? Here we’re going to dive in to that more.

First thing’s first: get up throughout the day!

Set a timer for every hour and get out of your chair for a few minutes (and make sure to leave your smartphone on your desk – it’s part of the problem!).

Hydration is a crucial, often overlooked, component to optimal function and pain-free movement. Supple muscles can move more freely and maintain their elasticity, which helps you stay mobile.

Be mindful of how much coffee, tea and alcohol you drink. Every 6 ozs of a caffeinated beverage requires approximately 10-12 ozs of water to rehydrate you.

If you haven’t been doing a dynamic warm up, now is the perfect time to start. Not only will this help to prevent a lot of potential running injuries, but it’s a great excuse to sneak in some movements that will both loosen tight hips and strengthen weak hips.

Even 5 minutes will go a long way to loosening up muscles and allowing you to run with better overall form.

A few ideas to get you started:

The following video includes a demo of some great dynamic warm ups for your hips. We also detail all of the skips and provide follow along warm ups in our Running Technique course!

As noted our tight hips after running aren’t just a result of the hip flexors, so there is a lot of areas to foam roll to help release them.

This foam rolling guide will give you a video demonstration, but a few things to consider.

Try setting your foam roller by the TV. Then you’ll remember to grab it for just 5 minutes each night. Physical Therapist Stuart Wilson recommends this to all athletes to get you ready for the next days workout.

As noted previously, if your glutes are weak they will pull your pelvis further out of alignment. This is going to create tight hip flexors and tight hips after running.

Including glute strength doesn’t have to be a big ordeal!

Now let’s move on to how to stretch hip flexors most effectively!

So let’s talk about a couple of key things and then here we are going to focus on fixing our anterior pelvic tilt, with a set of moves call the 3D Stretches.

The goal is moving your body through all planes of motion (sagittal, frontal and transverse), which increases circulation to prevent stiffness and mimics the natural way we move when walking and running.

This movements were provided by Michael Conlon owner and physical therapist at Finish Line Physical Therapy in New York City .

He really believes three-dimensional hip flexor stretches are the most effective way to improve flexibility and joint mobility. Try doing these once in the morning and evening to see major improvements in your posture.

Instead of a low lunge, we are going to really work in to the hip joint.

Lunge out with your right leg, making sure planted left foot is pointing straight forward. Reach both arms up to the ceiling with arms touching your ears or as close as possible.

Drive hips forward while extending your arms back, making sure to squeeze left glute to feel the stretch through the front of your hip x10 (this will address the sagittal plane / front & back).

Next, drive hips forward while leaning your trunk towards your front leg (right) to feel an increased stretch in your left hip x5. Repeat this motion in the opposite direction x5 (these two will address the frontal plane / side to side).

Next bring arms down to shoulder height. Drive hips forward while rotating your trunk towards the leg in front x5.

Repeat this motion in the opposite direction x5 (these two will address the transverse plane / rotation).

Switch legs and repeat the sequence with your left knee driving forward and your right heel remaining planted on the ground.

Now we are going to work on your hamstrings to help them release, as they could be causing tight hips or tight hips could be creating tension there! This is going to follow the same pattern of pulsing forward and then rotating your body in both directions.

Extend your left leg out in front of you with knee slightly bent and toes pointing towards the ceiling. With your arms overhead, drive your arms and chest forward x10 (sagittal plane).

Sit at the edge of your chair in an upright posture. Reach both arms up to the ceiling with arms touching your ears (or as close as possible) and extend back behind you x10 (sagittal plane).

Remember the goal of this set of moves is to help undo the effects of sitting all day and then going right in to a sport that can create more hip tightness.

You can’t just work your hips. You have to loosen up everything that is getting tight and pulling you out of alignment.

Hip pain and knee pain can have a lot of causes. It’s always best to see a specialists to figure out what might be going on for you, including looking at your stride. But starting with some of these tips can go a long way to resolving tight hip flexors.