I am so excited to bring you another great runner spotlight! Previously you heard from a runner who did a first marathon in 3:20 and a runner maintaining a 63lb weight loss. Today’s featured runner has had an amazing journey over the last few years. Not only has she transformed her body, but she has taken on many new challenges and found the fun in all of them! Her tackle any challenge mindset is what I believe allowed Larissa to successfully train for her first marathon largely by doing CrossFit. 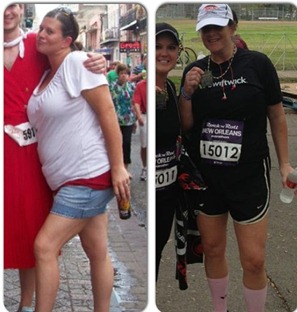 Blog: Zero to Twenty Six Point Two
First Marathon: Rock n Roll New Orleans Marathon
Finish time: 6:05
I am a busy wife and mom to 3 kids that keep me going 24/7. I found myself 60 pounds overweight 2 years ago and needed to change my life.

I started eating healthy and working out and lost 50 lbs in 4 months. I then discovered running and racing and fell in love.

Since then I have run tons of races, including 8 half marathons and now I’ve completed my first full marathon. I struggled with IT Band Syndrome while running for a couple months before discovering CrossFit in December of 2012 and have been hooked every since. It has helped my ITBS, my running, my core, and my weight loss plateau.

What made you decide to start running and when?
I started running in January of 2011 when my best friend, who is now my CrossFit coach, decided to run a local 5k and didn’t want to do it alone. I signed up, no training, no prior distance running; I thought I was going to die. At that point it became a challenge to compete and get better.

At what point did you set your sights on a marathon?
Some would say it was back in January of 2012, when I decided to name my blog Zero to Twenty Six Point Two. However, I think it was always in the back of my mind after the first race I ever ran. I knew that if I could start and finish a marathon then all of the training I had done would make sense.

CrossFit has become a huge part of your training, how did that change your running routine?
I started CrossFit in December because I was having so many problems with my I T Band and couldn’t run. I did some research and found that CrossFit athletes were running long distance races without any long distance training.

I figured why not! I had a marathon that I was signed up to run in February and knew I could not long distance train. Instead of backing out of the race, I CrossFit trained leading up to the race, and finished the marathon in 6 hours and 5 minutes. I was happy to finish with no IT Band pain and did not care what my time was.

I proved that a CrossFit athlete could start and finish a marathon and still walk after. What was great was that my recovery time was about 3 days. CrossFit has made me stronger person and runner.
[Larisa’s longest run was 9 miles, which she did weekly along with 5 days of CrossFit in the final 6 weeks of training.] 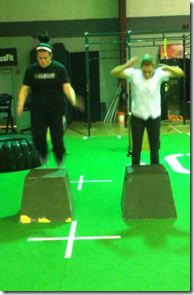 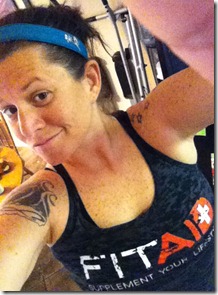 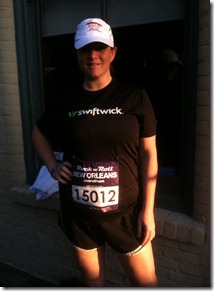 5 reasons for runners to incorporate CrossFit
1. Don’t be intimidated by the CrossFit gym, its all levels and runners need muscle for power.
2. If you are having hip/IT band/knee problems, get into a CrossFit gym! (it’s all about strengthening those hips)
3. A CrossFit workout is around 30 minutes total. Perfect for 2 a days if you also need to run
4. Endurance building! (the high intensity trains you to run farther with less effort)
5. Built around core exercises, it will help you run faster and stronger with better running posture.

Now that you have conquered 26.2 do you have a new running goal?
Great question. I think I will definitely run another marathon now that I mentally know that I can do it. I am starting to do more obstacle course race training. I want to incorporate my CrossFit into my running long term. I also am going to work on my 5k time, it’s terrible!

If you are looking for more checkout how to balance CrossFit and Running from BlondePonyTail. I was lucky enough to meet Larisa at the Runner’s World Festival and hope our paths cross again soon because her energy is contagious. And for those of you nervous about your first marathon…take heart that with the right training for your body you can cross the finish line with a smile too!
—————————————
Gratitude Journal

March 20
I am grateful for people who love all different kinds of activities! It proves there is no one way to be fit and healthy except for the way that feels best to you.

**Note Larissa types exactly like she talks with “ya’ll” and other great Southern accents, so I did edit a few pieces for clarity.