As if this isn’t a big enough conundrum for me on an normal day, throw a Halloween race in to the mix and more than once I’ve found myself having a major melt down a day before when I realized I didn’t know what to wear!

Luckily for you, my chafing, ouches and last minute issues have resulted in some great tips!

Keys to a Good Running Costume

First of all, we need to lay down some ground rules to keep your costume in check. One it’s absolutely possible to run fast in costume!! I saw a guy in an inflatable dinosaur at the Phoenix marathon and he crushed it!

Temperature Appropriate
The gorilla suit in Miami a bad a idea…in Minnesota fine. Just because it looks fun doesn’t make it great, most costumes aren’t breathable, so while it might be ok standing around, as you start to heat up and that heat is trapped it can become pretty unbearable.

Body Paint Issues
If you paint your face beware it could run or hinder sweat, resulting in overheating. I’ve seen issues with this for people who do full body paint for sure.

Ditch the masks
Breathing and seeing may be harder than you expect, test it out before you line up for the race. Or maybe just wear it for photos!

No paper
If you sweat it falls apart (where did my magic 8 ball go?!). It was in pieces by the time I hit the finish line.

Recycle
Use your running gear where possible to ensure no chaffing, dry fit and comfort. You can often incorporate them in to a lot of ideas, just checkout the options below!

Ditch it All
Hey if you really want to avoid the chafing then, consider embracing the new underwear run trend! Of course you might double check your Halloween Race rules before doing it.

Have fun!
Let’s be honest that’s the main goal, so stop worrying about if you look silly. In fact, the farther you take it often the more well received it is!

Whether you want to go all out, cheap and easy, scary, funny or dress as your favorite Disney character,  this round up of race costumes is sure to give you a few ideas to keep the crazy at bay for this coming Halloween Race Season.

Pin it for later for ideas throughout the year too! Who says costumes are only meant for trick-or-treat?

Costumes for the DIY Expert

If you’re the creative (and patient!) type and love putting in a little extra effort, these DIY costume ideas are great inspiration.

A bunch of grapes
These two went the creative route and pinned balloons on to their existing race attire. Not only is using balloons a cheap costume idea but you know they aren’t going to chafe too. Bonus points for going the extra mile with the bottle of wine in their stroller!

Princess Leia and R2-D2
A fun way to get the entire family involved in the race is by dressing the kids up in Halloween costumes too. If the kids aren’t old enough to run alongside you, then deck out their stroller in a creative costume like this one. 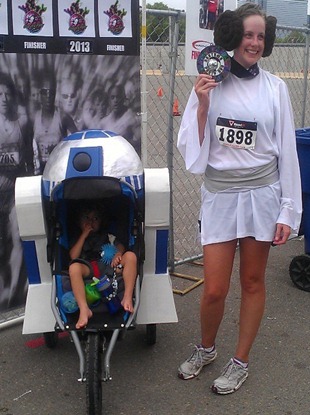 Disney Characters
We’re all kids at heart, aren’t we? Pay tribute to your favorite Disney princess or character with these fairly easy DIY race costumes. Not only are they fun to put together, but the lightweight fabrics make them easy costumes to run in.

Check out the tutorials to find out how to make a Snow White Running Costume and the Cinderella and Prince Charming Costume.

Ariel
Monica had fun putting together this easy Ariel costume from the Little Mermaid! A little bit goes a long way sometimes, and you won’t have any problems running in a costume like this one.

You’re up for a little bit of a challenge, but don’t want to spend too much time or money coming up with a crazy Halloween costume! Find inspiration at home or that bag of clothes you’ve been meaning to donate and recreate one of your favorite characters.

You’ll be impressed with what you can come up with at home.

Care Bears
Cut up an old sweatshirt and iron on your favorite Care Bear character. Add some fun flair with colorful headbands and face paint!

Minions
These minion costumes are actually pretty easy to put together. Grab a pair of jean shorts and dress them up with a yellow shirt and pair of tights. Add some suspenders and a yellow hat and your costume will be a hit (and keep you warm!).

Your Favorite Band
Turn your normal threads into a full on costume with just a little bit of flair. Grab your favorite band t-shirt and accessorize it accordingly! Face paint is always encouraged.

80’s Workout Instructors
Chances are you have a leotard and leg warmers tucked away somewhere. Don’t forget the added benefit of those being perfect for running!

iPod
Use that old white t-shirt in the bottom of your drawer and turn it into the face of an iPod. Sometimes you don’t need much to show off your costume!

Pac-Man
Cut up an old sheet or use extra material to form the Pac Man ghosts with some friends. These costumes are lightweight and make it easy to run in.

Pull Together in a Flash

So you have a Halloween race to run but don’t want to put much effort into planning a costume? Don’t worry, me too! Pulling out existing costumes and adjusting them slightly for running purposes tends to be my personal go to…what can I say I like to reuse things!

Where’s Waldo?
Take a quick trip to Wal-Mart and find striped shirt, hat and fake glasses and you’ve got a costume. Best part is that people can make a fun game out of trying to spot you in the crowd of runners!

Boy Scout Troop
All you need is a khaki shirt and bandana to put this costume together. It’s also a great way to keep warm if it’s cold out!

Referee
If you’re really stumped on a idea, then buy an already-made costume like this one. Add a headband or some colorful socks to stand out in the race.

Captain America
Dress like your favorite superhero! An easy way to do this is just simply buying a shirt with the symbol/logo on it. If you want to spruce it up you can add some props that won’t get in the way during the race.

Forest Gump
There’s no better running icon for enjoying the day that good old Forest! There are a lot of options from that movie, but this one is pretty easy.

Sometimes it’s best to not overthink the costume ideas!

Remember to have fun with it and always enjoy the race.

Have you ever raced in a costume?

6 Most Interesting Things to Do In Cañon City
Next Post:What to Eat Before a Marathon | Week of and Morning Of Plans